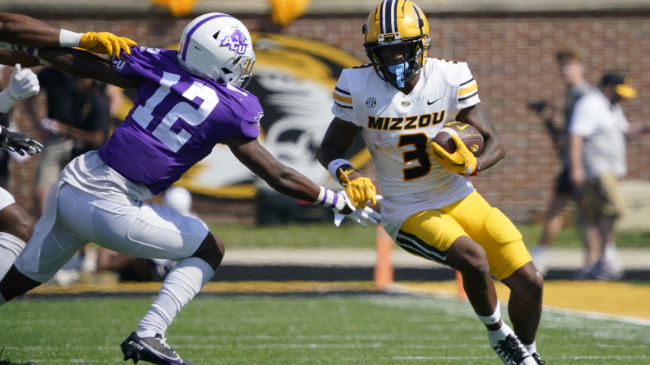 The Missouri Tigers fell in heartbreaking fashion to the Auburn Tigers over the weekend, 17-14 in overtime. That outcome might’ve just saved Auburn head coach Bryan Harsin’s job, but had Missouri gotten of its top players more involved, the result could’ve been different.

Five-star freshman wide receiver Luther Burden didn’t receive a single target against Auburn, only touching the ball once on a punt return which he brought back for a three-yard gain.

Over the Tigers’ first three matchups, Missouri has found ways to get Burden involved. He’d hauled in 10 catches for 78 yards while also landing seven carries which he turned into 40 yards and a score.

But after going unnoticed in the offensive gameplan on Saturday, Burden voiced his frustrations on social media.

After not receiving an offensive touch in Saturday’s loss, Luther Burden deleted any mention of the Missouri Tigers from his Instagram. He also posted a cryptic message saying, “Patiently waiting…”

Many immediately speculated about a possible transfer, naming a few nearby programs as possible landing spots.

Some mentioned Oklahoma, a program he was once committed to in the recruiting process. This fan wrote, “OU Flip,” after seeing Burden’s latest social media activity.

Other fans speculated he could wind up playing for another program in the SEC, heading to the West to play for Alabama. Or what about USC, where former Oklahoma coach Lincoln Riley now coaches?

While many speculated on Burden’s future, the pass catcher appeared to clarify his stance on the Tigers, which will ease the minds of Missouri fans for the time being.

He posted the following message on Twitter after rumors began circulating about a potential transfer.

For now, it looks like he’s staying in COMO.