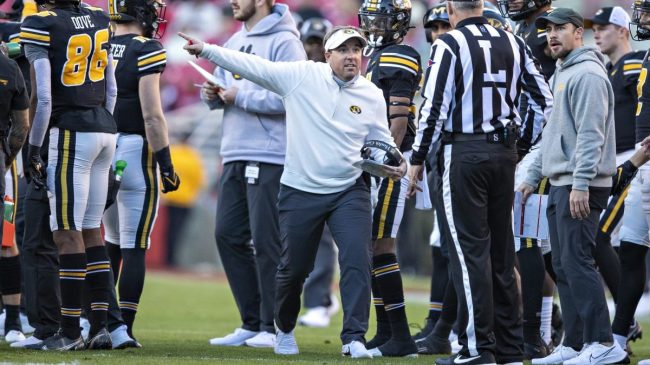 Bryan Harsin has had a rough go of things in his two years at the helm of the Auburn Tigers.

Harsin nearly got fired after an ugly first season where his team lost its last five games of the season. The start to year two hasn’t been much better and Auburn fans were calling for his head after a blowout loss to Penn State in Week 3.

That put Harsin in a rough spot entering his team’s SEC opener with Missouri on Saturday. Beyond the pressure of coaching for his job, he also had to sort out a messy quarterback situation after an injury to starter T.J. Finley.

With just seconds remaining in the game against Mizzou, it looked like Harsin was on his way out the door. Missouri had the ball inside the Auburn 10-yard line as the seconds ticked away and they prepared to kick a game-winning 26-yard field goal as time expired.

Missouri kicker Harrison Mevis is listed at 5-foot-11, 243 pounds. A particularly rotund kicker. But he’s also a particularly good kicker. Mevis went 23-of-25 for the Tigers in 2021 and was named an All-American.

Mevis pushed his kick wide right and sent the game into overtime. Anders Carlson then put Auburn on top with a 39-yard kick and the hosts forced a fumble to hold on for a 17-14 victory.

The inconceivable miss may well prove to have saved Harsin’s job for at least one more week.

Harsin just saved his job because of that lmao

Jordan-Hare is truly a magical place.