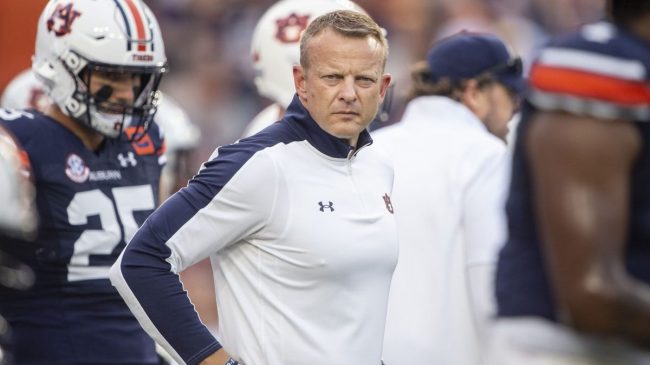 Bryan Harsin’s short tenure as the head coach of the Auburn Tigers football team has been tumultuous to say the least. Harsin limped to a 6-7 record in his first year at the helm after a strong 5-2 start to the season.

But that was only the start of Harsin’s troubles.

He then found himself embroiled in a controversy about an alleged affair with an Auburn staffer. That was exactly the reason Tigers fans needed to call for his firing.

The Auburn athletic department then launched a full investigation into Harsin as his coaching staff quickly began to fall apart.

Some college football fans raced to his defense, though one of those fans was suspected of being Harsin’s father. He eventually survived the chaos, though athletic director Allen Greene did not.

remember when Auburn went through basically every step to fire Harsin

and then just didn't

Harsin got the opportunity to air his side of things at SEC Media Day and did not hold back.  But ultimately, his legacy at Auburn would be decided by results on the field.

The Tigers started the 2022 season with a pair of underwhelming victories over Mercer and San Jose State. But the real test came on Saturday as Auburn welcomed Penn State into Jordan-Hare Stadium for a showdown of power programs.

The Tigers failed that test and did so in disastrous fashion.

The Nittany Lions racked up 477 yards of total offense, including 245 yards on the ground en route to a 41-12 blowout victory.

Auburn turned the ball over four times, with both Robby Ashford and T.J. Finley throwing an interception during their time at quarterback.

Tigers fans couldn’t believe how bad the game went and focused their anger directly on one man.

I hope nobody makes the “he needs more time” argument for Harsin when we’re in the transfer portal era and you can transform a program almost overnight.

Look at Lincoln Riley with a USC program that went 4-8 last year. Look at how Mel Tucker turned Sparty from 2 wins to 11.

Nothing like ending a vacation with an embarrassing dumpster fire failure from the alma mater. Fire Harsin. Better yet, travel back in time and don’t hire him. Fuck.

Though fans of rival teams (see: Alabama) had some other ideas.

Some Auburn fans are already lining up his replacement.

If Harsin don’t last this season or is let go after the season. I say #AuburnFootball Hugh Freeze 🥶 me please‼️‼️

Just in case you thought things would get easier, the Tigers now have Georgia, Ole Miss, Arkansas, Texas A&M and Alabama left on their 2022 schedule.