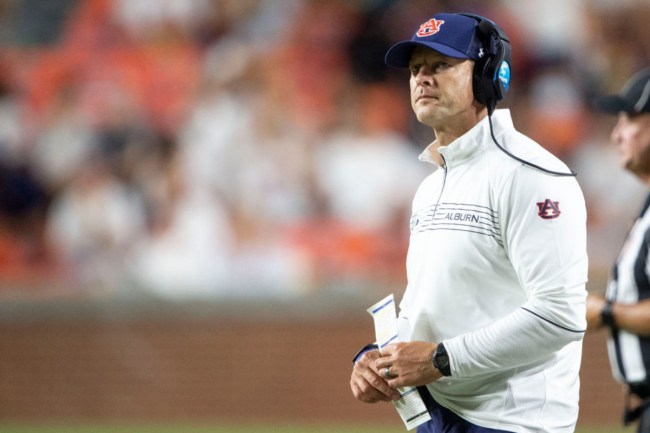 What drives ‘The Paul Finebaum Show’ is the people that call into the program to talk college football. The characters that, more often than not, call in to talk trash about rival programs are what make the show successful.

Over the years there have been many legendary callers and conversations on the SEC-focused show, but if the speculation around recent caller ‘Dale from Boise’ is true, Dale may sit atop the list of wildest calls in show history.

The future for Auburn head coach Bryan Harsin does not look great, however, Auburn very well could stick with him as its head coach.

After going 6-7 in his first season, there is growing speculation about the way he’s running the program and perhaps some extracurricular activities off the field. Auburn itself recently released a statement essentially saying that it’s digging everywhere it can to see what exactly is going on.

‘Dale from Boise’ doesn’t like the slander that Harsin has been receiving, so he elected to call into Finebaum and defend the Tigers’ head coach.

Three things are very important here: Harsin is from Boise, Idaho, coached Boise State before taking the job at Auburn, oh, and his father’s name is Dale.

Those three facts got people wondering if Dale is, in fact, Bryan’s dad.

Is ‘Dale From Boise’ On Finebaum Actually Bryan Harsin’s Dad?

Dale, introducing himself as a “first-time caller on the show” jumped on the program and started defending Harsin’s recruiting since arriving at Auburn. He also made statements about Harsin’s time, and recruiting record, while at Boise.

This got Finebaum himself thinking that Dale may, in fact, be Bryan’s dad.

“I got to Dale from Boise and he’s talking,” Finebaum said, according to AL.com. “He’s saying a lot of very inside Boise State type of things. He mentions Kellen Moore and these other things I was aware of when Harsin was the offensive coordinator. The tone was that Bryan Harsin was responsible for all the success out there, and I didn’t object.”

“I didn’t know his dad’s name was Dale until later, but I was going to be respectful,” Finebaum said about the call. “This guy, obviously, is fan of Harsin or knows Harsin. He’s calling from Boise. When he hung up, one of my producers said, ‘Man, someone on Twitter just posted that was his father.’ I said, ‘You know what? I wonder if it was.’

Mark Heim of AL.com did a bit more digging and reached out to a local radio station in Boise to get their thoughts.

“This is where Harsin is from,” a station spokesman said. “Where his dad has a history of talking to the sports station, and (we’re) asking the same question. We feel pretty strongly that ‘Dale from Boise’ could have been Harsin’s dad.”

Things are never 100% calm when it comes to SEC football, something is always going on, even in the middle of February.