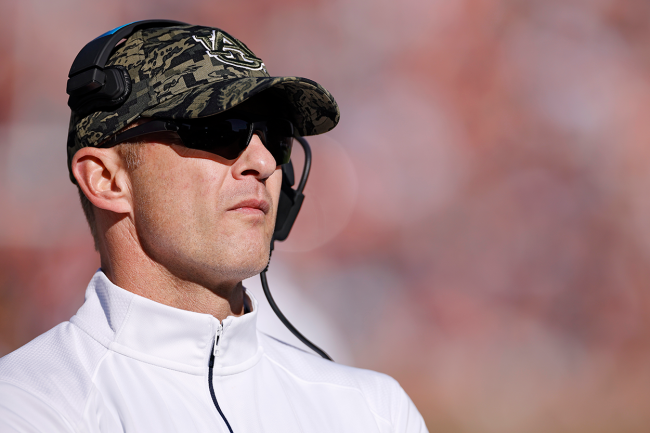 On late Thursday evening, a report surfaced out of Alabama suggesting that Auburn head football coach Bryan Harsin’s immediate future with the Tigers is in question. The report, authored by Justin Hokanson from AuburnLiveOn3 of On3 Sports, says that Harsin’s job may be in jeopardy.

Harsin does not think so. Or, at the very least, he does not know so.

The reported lack of job security comes after Harsin went 6-7 in his first year with the program. It also comes after a rough stretch in terms of its coaching staff during the offseason.

Harsin is currently on vacation, as is the case with many college football coaches during the current down period, but he addressed the report with ESPN’s Chris Low and Pete Thamel.

Here is what he said to ESPN on late Thursday night:

“I’m the Auburn coach, and that’s how I’m operating every day. I want this thing to work, and I’ve told our players and told everybody else there is no Plan B. I’m not planning on going anywhere. This was and is the job. That’s why I left the one I was in, to come here and make this place a championship program and leave it better than I found it.”

According to the report, Harsin’s potential ousting is in regard to the factors that led 20 players and five assistants coaches to leave the school. University officials are investigating the current climate of the program.

Per ESPN: “Upper administration officials at Auburn, including executive vice president and chief operating officer Lt. Gen. Ron Burgess, have conducted interviews with some of the people exiting, sources told ESPN. At the root of the inquiry, sources told ESPN, is the overall volatility in the program and Harsin’s treatment of players and assistant coaches.”

Harsin continues to deny anything of the sort.

He told ESPN that there were different reasons for players and coaches choosing to leave Auburn. Harsin listed everything from other job opportunities, to personal reasons, to coaches underperforming, to a player leaving because he was a distraction to the team.

“Any attack on my character is bulls—,” Harsin said. “None of that is who I am.”

He also doubled down on the fact that he wants to and plans to be in Auburn next year and beyond.

“This is where I want to be. This is what I want to do,” Harsin said. “That’s why I came here. I didn’t come here to fail. We’ve got to build something, and right now I feel like when you hear some of these things, that there’s a lot of things building against me.

If Auburn was to fire Harsin without cause, his buyout guarantees 70% of the money remaining in his contract. As of now, that would be $18.3 million.