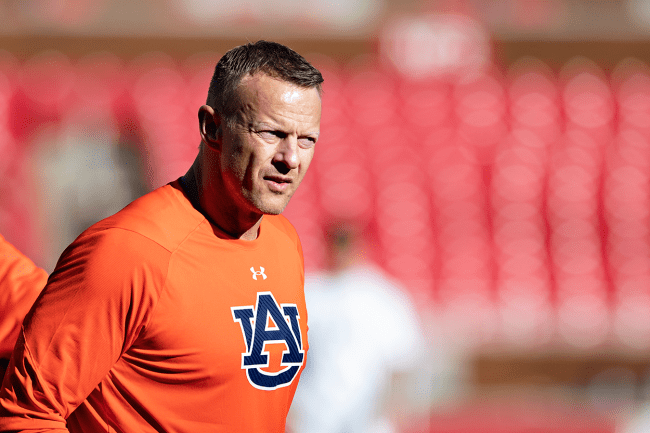 On Thursday evening, a report surfaced out of Alabama suggesting that Auburn head football coach Bryan Harsin’s immediate future with the Tigers is in question. The report, authored by Justin Hokanson from AuburnLiveOn3 of On3 Sports, says that Harsin’s job is in jeopardy.

Later in the evening, Hokanson said on a Twitter space that he has definitive, significant reason to believe that there is a movement within Auburn University and its athletic department to try and remove Harsin from his role. Immediately, the speculation began.

For starters, Harsin’s reported lack of job security comes after going 6-7 in his first year with the program. It also comes after he declined to comment on whether he would comply with the school’s December 8th deadline for all university employees to be fully vaccinated against COVID-19 in October.

In addition, Auburn has had a rough stretch in terms of its coaching staff. After the end of the 2021/22 season, offensive coordinator Mike Bobo was let go from his role.

Not long thereafter, the Tigers hired Seahawks quarterbacks coach Austin Davis to replace Bobo. Less than six weeks after he was hired, Davis stepped down on Monday ahead of National Signing Day and cited “personal reasons.”

Less than 24 hours later, defensive coordinator Derek Mason left for the same role on Mike Gundy’s staff at Oklahoma State. It has been tumultuous, to say the least.

There have also been a lot of rumors surrounding Harsin.

On late Thursday night, not long after his immediate future came into question per Hokanson’s report, Harsin’s wife Kes and one of their daughters addressed the rumors on Instagram.

Kes went first. She posted twice on her Instagram story.

The first post included text of “blah blah blah” repeated over and over again. Her second post read “rumors are carried by haters, spread by fools, and accepted by idiots.”

In response to her mother’s posts, Harsin’s daughter said “You ever met a hater doing better than you? Yeah, me either” and “Preach mama!”

The unverified rumors that Harsin’s wife and daughter are addressing appear stem from an issue that has been a hot topic of discussion among Auburn fans on social media and message boards. As things currently stand, they are exactly that — rumors — but this could be worth keeping an eye out as things continue to develop.