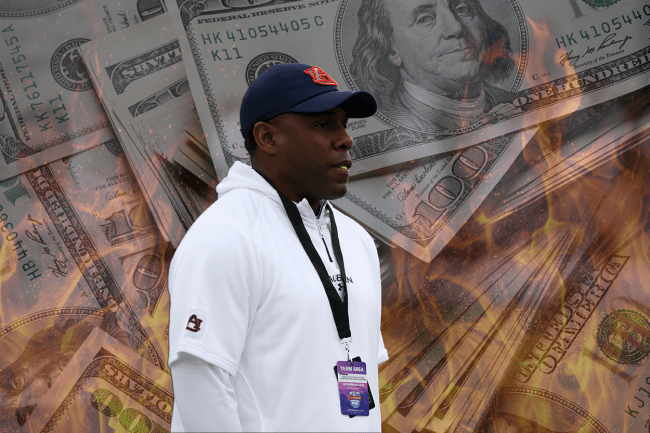 The situation on the Plains is rather precarious at the moment. While Auburn basketball and gymnastics are on fire in a good way, Auburn football is on fire in a bad way.

The Tigers are currently in disarray as head coach Bryan Harsin’s job security remains up in the air. Late on Friday night, a report surfaced out of Alabama that said Harsin’s immediate future with the program is in question.

Auburn has seen a mass exodus of both players and coaches in recent months. As a result, concerns have been raised about the culture that Harsin has created in his first year with the program.

Many former players have come out against Harsin after moving on from the Tigers, but there have also been quite a few current and former players to come to his defense. Harsin vehemently denies any wrongdoing and his daughter pushed back on the claims from former players.

As a result of the commotion, Auburn released a statement on Monday that said it is looking into the situation. The school is gathering all of the details, sorting out what is true and what is false, and figuring out how to proceed.

Meanwhile, Harsin and his family are on vacation in Mexico.

Auburn is in an actual Mexican standoff with its football coach

There is a lot that needs to be sorted out. However, the general belief across college football is that it will be hard for Harsin to survive this current situation.

Should he be fired without cause, he would collect a large buyout from the school. Should he be fired with cause, there will likely be a large litigious process to follow. He could also choose to settle with Auburn and “mutually agree to part ways,” but if he remains adamant in his innocence, he may not be willing to do so.

It is a contentious situation, to say the least.

A big part of the recent fallout was in regard to turnover on the coaching staff. On offense, Harsin is set to hire his third coordinator in less than 13 months.

On defense, former coordinator Derek Mason left for a lateral move. Mason, who was previously the head coach at Vanderbilt, coached the Tigers’ defense in 2021. After the season, he left for the same role at Oklahoma State.

It was a big statement.

“When you a get a guy like Derek Mason who is so well-respected and he’s wanting to get out like that, that should tell you a lot. Relationships matter, especially down in the South,” said a source to The Athletic.

Not only did Mason leave for the same job at another school that is not in the SEC, he took a huge pay cut to do so. Mason made $1.5 million to oversee the Auburn defense in 2021. He will make $1.1 million to do the exact same thing at Oklahoma State in 2022.

Mason is getting paid $400,000 less to not coach at Auburn. That is not a small number and it certainly says a lot.