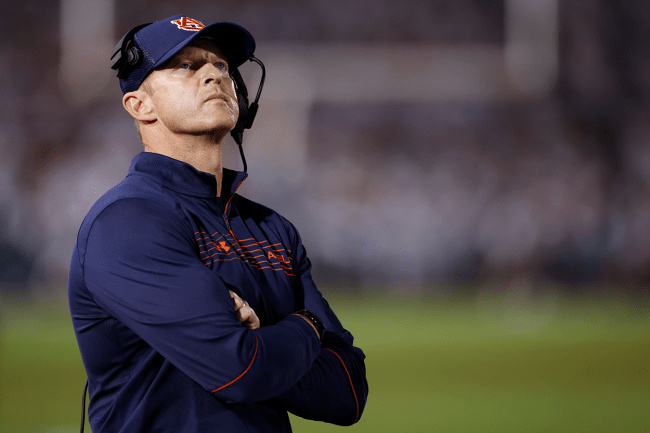 Less than 24 hours after a report surfaced out of Auburn regarding Bryan Harsin’s job security, former and current Tigers are sharing their opinion on their head coach. Harsin’s daughter got involved in the conversation after a group of players went live on Instagram.

On Friday morning, former Auburn defensive tackle Lee Hunter posted an Instagram story that described his experience with the program in 2021. He expressed that leaving the school was difficult, but ultimately alluded to Harsin’s leadership style as a key reason for his departure.

It is worth noting that players have come out in support of Harsin.

Auburn Family, Don’t Believe The Things You See. @CoachHarsin Works Harder Than No Other Man To Put This Program In The Best Position To Be Successful Point Blank Period. We Are Behind Him 100% No Matter What’s Being Said. Great Man Of Character Who Loves This Team!
Stop The BS!!

I’ll go into a foxhole with guys who love each other and back up Coach Harsin! Also, if you reporters think this “publicity” is giving you credibility, you are more naive than I thought. Come out to a workout or practice and write about things you see instead of things you want

On Friday morning, a group of former Auburn players gathered on Instagram including Monday, Hunter, former linebacker Zakoby McClain, and former wide receiver Kobe Hudson, who is now at UCF. Over 1,700 people joined their Instagram live.

Here are some of the things that were said:

Before the live video ended, Hudson made perhaps the biggest statement of the stream:

“We ain’t saying he’s a bad man. We’re just saying what he can improve on.”

During the Instagram live, Harsin’s daughter Dayn joined the chat. She pushed back on the players who were calling out her father.

If you want some entertainment on this Friday y'all should go check on Kobe Hudsons Instagram lol.

Overall, the point of the Instagram live was to let high school recruits know what to expect.

The Instagram live is over now, but my biggest takeaway from linebacker Zakoby McClain, safety Smoke Monday, defensive tackle Lee Hunter and wide receiver Kobe Hudson was they wanted everyone to know what to expect from Bryan Harsin with Harsin recruiting their high schools

Meanwhile, Harsin himself continues to stand firm and offered a very aggressive response to the allegations.