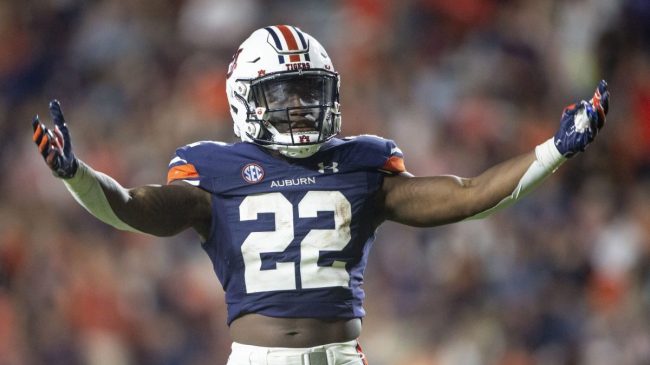 Things have been pretty rough for fans of the Auburn Tigers in recent years. The program fired Gus Malzahn after a 6-5 season in 2020. Replacement Bryan Harsin limped to a 6-7 record in his first year, leading fans to call for him to be ousted as well.

Harsin survived those calls, and the early returns in year two have been, well, not good.

Auburn begins the SEC slate of its schedule this Saturday against Missouri and will do so without Finley, who is dealing with a lingering shoulder injury.

But Harsin isn’t giving any clues as to what he’ll do at the quarterback position against Mizzou.

"We're working through the guys at every position. We'll see," he said on the SEC teleconference.

It is unlikely Finley will be available for this SEC opener Missouri. pic.twitter.com/QyJgXV0B32

Though one of his players may have just spilled the beans.

Auburn’s best offensive weapon is undoubtedly star running back Tank Bigsby. Bigsby rushed for nearly 1,100 yards and 10 touchdowns a year ago. He’s averaging 6.2 yards per carry and already has three scores this year. But he’s not alone in the backfield.

Sophomore Jarquez Hunter and freshman Damari Alston have also seen success in 2022. Alston was a four-star recruit in the class of 2022 that chose the Tigers over LSU and Penn State among others. He’s appeared in all three games this season and is thus far averaging 7.0 yards per carry.

But the freshman may have just let slip that Harsin plans to go with fellow freshman Holden Geriner at quarterback against Missouri.

Alston posted a picture of himself and Geriner together on Twitter with the caption “very soon” on Wednesday night. Geriner, like Alston, was a four-star recruit in the 2022 class.

Geriner’s teammates have had plenty of praise for the young signal caller in practice.

Auburn defensive lineman Marcus Harris on freshman QB Holden Geriner: "That man can zip it…. He throws one of the best balls I've seen."

While media members and fans think it’s just a matter of time before he sees the field.

Don’t be shocked if Holden Geriner gets playing time on Saturday against Missouri with TJ Finley sitting out with an injury.

I would like to watch Holden Geriner play football Saturday.

The good news for Geriner is that he can’t be much worse than what the Tigers have already have, Go get ’em, kid.