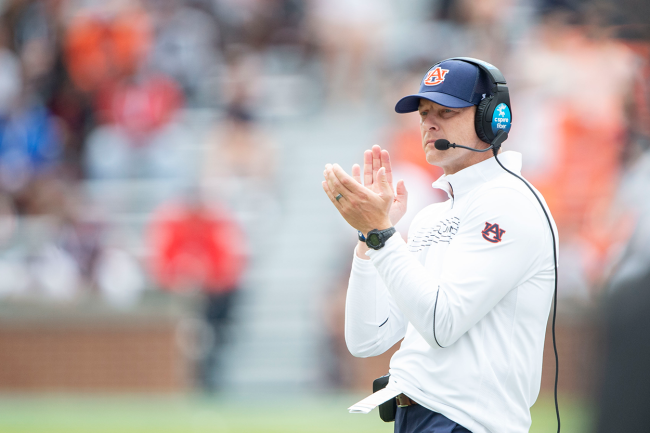 Bryan Harsin’s second year at Auburn began with one of the most bizarre offseason controversies in college football history. After his immediate future with the program was reportedly in question in early February, the 45-year-old head coach ultimately kept his job.

However, it wasn’t for a lack of trying to get him fired.

Social media first ran rampant with gossip about the 45-year-old’s personal life. From there, former Tigers came out against the culture that Harsin built in his first year with the school.

And then the team’s defensive coordinator took a huge pay cut for a lateral, or lesser, move. Meanwhile, Harsin and his family, as well as other former players came out vehemently against the allegations— all while on vacation in Mexico.

In the end, after an internal investigation, Harsin was retained as head coach at Auburn. It was a very unusual, unprecedented situation.

Now, a month removed from the final decision, Harsin spoke with ‘Next Round Live’ ahead of the Tigers’ first spring practice on Monday. He offered his thoughts on a lot of things, including the school’s boosters and social media.

After a controversy and chaos surrounds a program like it did Auburn this offseason, a team could completely collapse. Harsin is saying the opposite, that instead, it is going to galvanize the Tigers and make them better.

“Out of that, you get to find out some things that maybe wouldn’t have happened,” he said. “If that weren’t the case. So to see guys step up and lead and to get in front of people and to have conversations, and come out and say things on social media and to back up what it is that we’re doing.”

Harsin also said that a big part of the positives that have come from such a negative is in regard to leadership.

“To really see leadership, I think when leadership is needed, someone has to provide it and I saw a lot of our players do that, and I was very proud of those guys for doing that. … That’s part of where we are today. Because guys did that, because they acted, because they believed in what they were saying, I feel like our team is in a really good place. I feel like where we’re going in this program is where we need to be going to try to bring Auburn to be a championship-level program because that’s what we wall want to do.”

To close his great spin on what happened, Harsin added that current players and recruits understand that what Auburn is building will only help them be successful down the road.

“They know that we have leadership and guys on this team that will stand up and do those things,” he said.

Auburn’s head coach couldn’t have been more excited to get out onto the field for spring ball. It will be interesting to see 2022 on-field results.