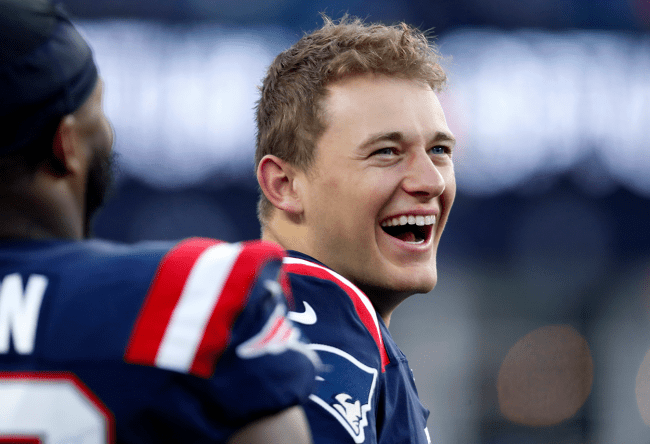 Patriots rookie quarterback Mac Jones didn’t always know what he wanted to do when he was growing up. His parents didn’t push him into sports, and he was always wanting to try new things.

As such, he gave both modeling and acting a shot as a child.

During an appearance on WEEI’s “Merloni and Fauria Show” on Monday, Jones was asked about his first job and his worst job.

The 23-year-old’s first job was working for his father. His worst job, he revealed, was the modeling.

“Worst job, I mean I used to be a child model and actor or whatever,” Jones said. “That was fun. Nothing crazy but there are a few commercials out there that you guys can try and find … I broke the camera.”

He also confirmed that his teammates are aware of his modeling past. Within minutes, photos from Jones’ modeling days began to circulate across the internet.

#Patriots QB Mac Jones was a child model/actor. Appeared in some commercials. pic.twitter.com/F8GGLwH6v1

Shortly thereafter, more details began to emerge from Jones’ modeling past. Apparently, at one point, he even went to a camp that taught him how to be the best at his craft.

Jones’ work ethic was on display from a young age and the photos of little Michael McCorkle are priceless.

He went to a “modelling” camp when he was young. pic.twitter.com/XjsoWutTo3

While at the modeling camp, Jones also partook in a talent show. As it would turn out, the Jacksonville-native is pretty slick with it— or at the very least, he used to be.

And Mac Jones had a talent show there as well. pic.twitter.com/XQ3URlOQVr

Now we know where that NFL Draft night walk came from.

Mac Jones walking like he got a zoom call in 10 minutes but he gotta handle some business first pic.twitter.com/XutXLcZlXN