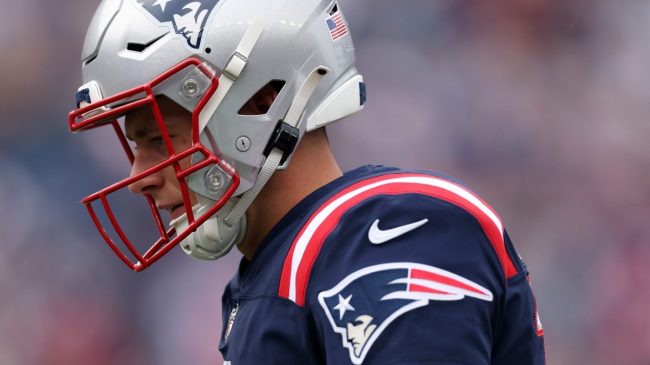 In Week 3, Mac Jones had to be carried to the locker room while he was screaming in pain due to an ankle injury. At first, it was originally believed he’d have to miss several weeks. However, the New England Patriots have been a bit more optimistic lately, as the quarterback sought a second opinion on his ankle. Now, it appears as though Jones is a cyborg based on his latest comments.

According to Mike Giardi, “Jones is in the facility and participating in game planning.” Additionally, it sounds like Mac Jones has been telling his teammates “to not count him out of this weekend’s game at Green Bay.” If the Patriots quarterback participates in Week 4, then that will be an incredibly fast turnaround.

Per sources, Mac Jones is in the facility and participating in game planning. The #Patriots QB has to told multiple teammates to not count him out of this weekend's game at Green Bay, and is still operating as if he has a chance. Practice is scheduled for around 12:35 today.

Considering we literally watched Jones get carried to the locker room screaming in pain, it would be amazing to see him hit the field against the Packers. Regardless, he sounds confident he’ll return and has us wondering if he’s actually a cyborg. What other reason could there be for Mac Jones to make such a quick recovery?

With that in mind, the Patriots have not made an official announcement yet. They do plan to start Brian Hoyer if Mac Jones is unable to play. That’s the only confirmed information available about the situation right now.

So, keep an eye on the Patriots quarterback for the next several days. New England is going to monitor Jones closely and see if he can play. Regardless, Mac Jones and the organization seem extremely optimistic about the injury.