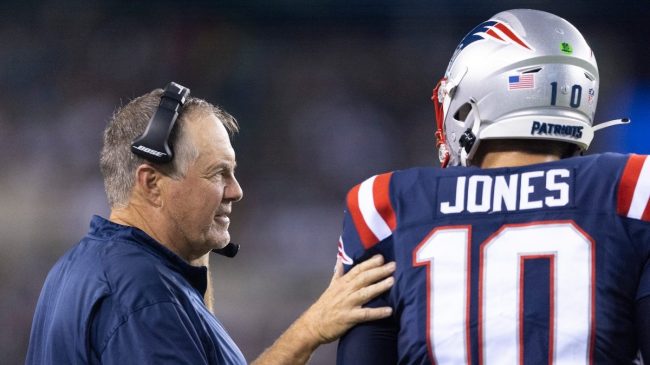 The New England Patriots currently have a quarterback problem as Mac Jones suffered an ankle injury in Week 3. Bill Belichick continues to get asked about Jones’ health status, but the legendary head coach has no answers. On Wednesday, Belichick provided a hilariously classic response to reporters.

Bill Belichick Is Clearly Not A Doctor

During a press conference, Belichick was asked for details regarding Mac Jones’ injury. Instead of offering a real update on the Patriots quarterback, the head coach stated, “What do I look like? A doctor? An orthopedic surgeon? I don’t know. Talk to the medical experts.”

At the very least, Bill Belichick had a sly smile on his face during the press conference. He definitely has a dry sense of humor, as we’ve seen through the years. Although everyone is curious to know what’s going on with Mac Jones, the Patriots head coach is not one to spill the beans to the media.

It’s believed that Jones suffered a high ankle sprain in Week 3. He was seen being carried to the locker room screaming in pain, which is never a good sign. The Patriots quarterback sought a second opinion on his ankle as well, so his injury status is yet to be determined. Regardless, New England has spoken highly of Brian Hoyer, as he’s familiar with the system and a true veteran of the sport.

With that said, keep tabs on Mac Jones for now. There is still plenty of time for him to be given the green light to play in Week 4. However, that will depend on how severe his ankle injury is.