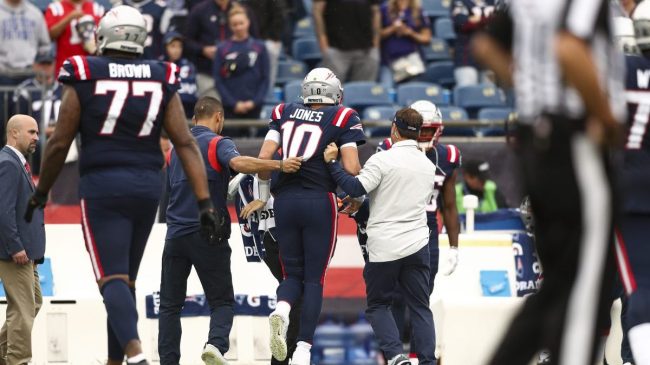 The New England Patriots appear to be at odds with star quarterback Mac Jones.

New England selected Jones with the 15th pick in the 2021 NFL Draft and he quickly repaid their faith. The Alabama product threw for 3,801 yards, 22 touchdowns and 13 interceptions as a rookie and was named an AFC Pro Bowl alternate.

Jones’ second season, however, has not gotten off to a glowing start.

He reportedly struggled to adapt to the Patriots’ change in offensive coordinator in the offseason and it’s shown early in the 2022 season. Through three games, Jones has thrown for 786 yards, just two touchdowns and a troublesome five interceptions.

Three of those interceptions came in Sunday’s game against the Baltimore Ravens. Jones was eventually forced out of that game due to an ankle injury that left him screaming in pain.

We now have more news on that injury and it turns out the prognosis it not good for either Jones or New England.

ESPN’s Adam Schefter first reported that Jones suffered a “severe” ankle sprain that would require most people to have surgery. But Mac Jones is not most people and the plan for him was to miss multiple games before making a return.

Apparently, Jones may not have been the biggest fan of that plan.

Boston sports radio producer James Stewart then reported that Jones and the Patriots organization “are at a disagreement” about how to handle the injury. Stewart said that Jones wants to seek a second opinion. He added that the QB is “comfortable” missing more time than the team initially planned.

The Patriots and Mac Jones are at a disagreement about how to move forward.
Patriots want to get him back as soon as possible and he’s hesitant to their guidance and wants to proceed with caution. 2nd opinion.
Pats timeline is 4 weeks max, he’s comfortable waiting 6-8 if needed. https://t.co/XFeIm07q1t

New England currently sits at 1-2 on the young season. But things could get away from the Patriots quickly without Jones. The Miami Dolphins lead the AFC East at 3-0. While Super Bowl favorite Buffalo boasts a 2-1 record.

If Jones misses significant time, New England’s playoff hopes could be out the window by the time he returns.