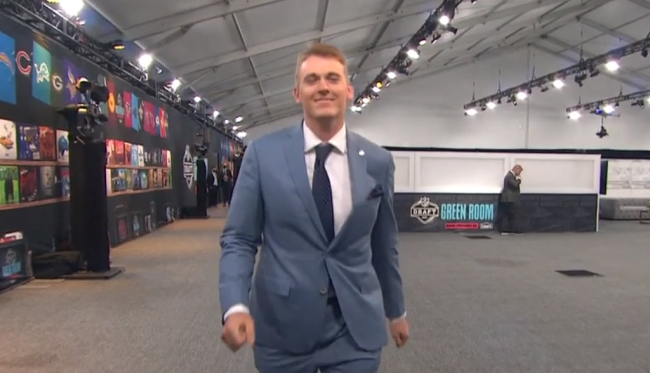 The New England Patriots have their QB of the future and he’s a pretty damn fast walker.

On Thursday night the Patriots took Alabama quarterback Mac Jones with the 15th overall pick in the NFL Draft. Jones was the fifth QB picked in the draft and averted disaster after he slid to the 15th spot after reportedly getting interest from the 49ers at the #3 pick.

After NFL commissioner Roger Goodell called Jones’ name on Thursday night, the Alabama QB shot up from his seat and aggressively power walked to the stage.

Mac Jones was MOVING to the stage 💨 pic.twitter.com/5JAZuihHCo

NFL fans quickly mocked the new Pats QB over the ridiculous way that he walks.

Tell me Mac Jones walk did not look just like this? pic.twitter.com/tC9HaPT6UF

Mac Jones had that, in a restaurant headed to the bathroom walk. #NFLDraft