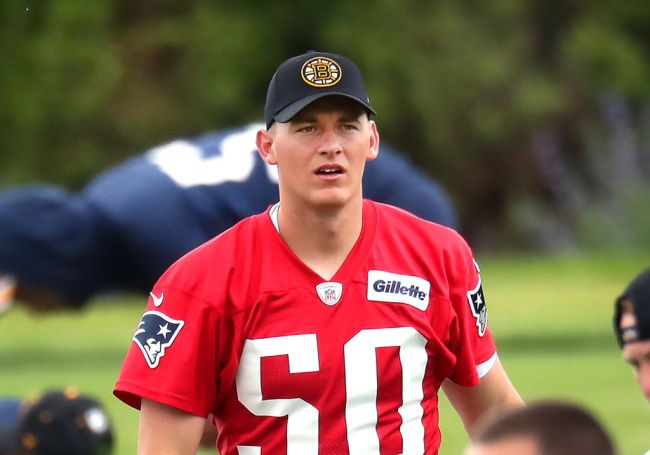 Cam Newton has a storied history of dolling out ridiculous nicknames amongst his teammates. The former NFL MVP always comes up with creative, out-of-the-box ways of referring to his teammates. However, when it came to Mac Jones, it was pretty basic.

Jones, who was drafted by the Patriots with the No. 15 pick in the most recent NFL Draft, is expected to be the team’s future in waiting. He is set to back up Newton this spring, but could very easily play his way into the starting job with an impressive camp and a poor performance early season from his elder. As such, he can be considered Newton’s direct competition. There isn’t a quarterback battle, per say, but there is a case to be made for Jones.

He spoke with the media on Thursday and said that Newton has “done an awesome job being being a good mentor.” While the hostility between the two appears to be at a minimum, there is an underlying storyline that may suggest Newton has slight animosity toward his first-year counterpart. Either that, or he’s lost his touch.

Jones revealed in the press conference that he has received his nickname from the 32-year-old. Newton is calling him “Mac ‘n Cheese.”

Cam Newton has a knack for giving nicknames to his teammates. Mac Jones says his is "Mac ‘n Cheese.” pic.twitter.com/G0f25LBgqs

Don’t get me wrong. It isn’t a terrible nickname and Jones was able to laugh about it. It makes a lot of sense. With that being said, imagine being called “Mac ‘n Cheese” by your teammates. And imagine how many times that Jones has been called that name, or “Big Mac” or “Mac Daddy.” It can’t be a name that he absolutely LOVES, and it’s easy to think that Newton might have factored that into the equation.

Even “Mac Truck” or “Macintosh” would have been better.

Comparatively, it’s some of Newton’s worst work. Again, perhaps it was intentionally poor. If so, it’s just subtle enough of a jab to drive Jones crazy.

Here are Newton’s other nicknames for his current and former teammates and coaches in New England: