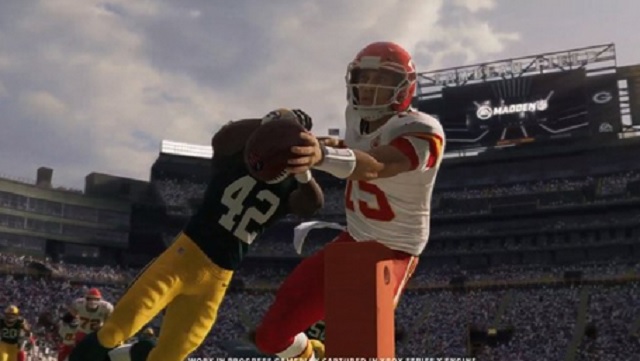 Microsoft’s Xbox Series X is set to get released during the holiday season and we’re now beginning to see gameplay footage for the new nextgen console.

On Thursday afternoon, Microsoft hosted their Inside Xbox stream to show off all the new titles that are coming this year.

It’s time for your first look at next-gen gameplay from our global development partners with the Xbox Series X.
Boot up the show and take everything in. #InsideXbox https://t.co/9KTA9f88mw

One of the games set to be released on the Xbox Series X is the nextgen version of Madden 21.

Madden 21’s new feature… Dive for the pile-on… Not to mention the graphics look the same & we see the same break tackle animation😩😂😭. pic.twitter.com/BFh86DAUSG

The Internet didn’t seem too impressed by the new Madden even on the new console.

Madden 21 = the same exact game you buy every single year with no real innovation, no big changes to improve experience….nothing.

How about you make Madden 21 no more than $40? It's so stupid to buy the same game every year for $60 with little to no changes or improvements. Keep in mind, I don't buy every single Madden, but there are people out there who do. These games are just copy and paste, and are $60. pic.twitter.com/gv0GiQt0Ub

Excited to see what Madden 21 has in store for us this year pic.twitter.com/X00wxWe6Yx

Madden 21 aka the same game as every other year pic.twitter.com/HrEWRhyIsn