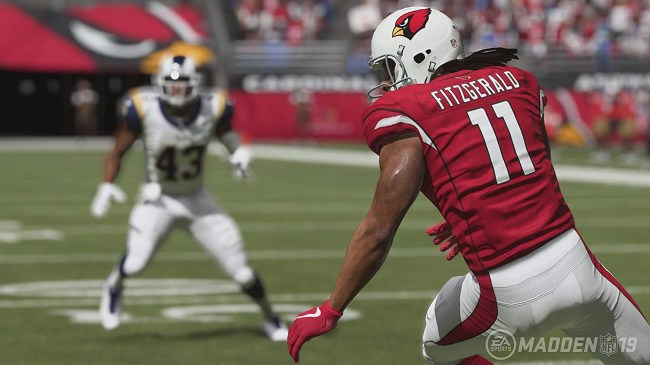 The Madden NFL video game franchise is one of the most successful ever, with sports fanatics and gamers using its release each August as a small appetizer to the upcoming NFL season. In fact, it could be argued that it’s release is the unofficial start of the season, as it provides the first glimpse at new players, gameplay, drama and, of course, ratings. It’s that last part that usually gets the most attention.

Every single year, we hear wild stories about NFL players being absolutely pissed that their Madden NFL rating isn’t higher, with quarterbacks mad that their accuracy rating is 82 and not 92, or a running back complaining that his speed should be 95 or above. Hey, nothing’s going to be an exact science when trying to duplicate a real-life person into a digital portrayal, so rating every single player in the NFL can be challenging. However, with the complaints came some adjusting by EA Sports, with the Madden NFL team increasing (or decreasing) a player’s rating each week given their real performance during the season.

And, thanks to a recent feature on ESPN.com, we know just how challenging a Madden NFL ratings adjuster really is.

The ESPN piece goes into great detail about the highs and lows of the job — for instance, ratings adjusters aren’t actually paid for their work, with only their flights and hotels picked up by EA Sports. Of course, ratings adjusters for the Madden NFL video game also get hooked up with passes to stand on the sideline of different games, so that’s a perk in and of itself.

Still, the job takes some serious chops, as well as a keen eye, so it’s not as ceremonial as it might first appear. According to ESPN, when a Madden NFL ratings adjuster attends a game, it’s with a purpose — “to see a certain player or position group or to understand further why a team is playing a certain way.” After watching the designated player or group, the adjuster then reports back to Dustin Smith, the lead ratings adjuster, with the observations from the game then impacting how ratings shift week-to-week.

“There is actually an impact,” Smith said. “There’s definitely some ceremony to it. We have fun with it. If they come back with any good notes and it was something I didn’t see, we definitely take advantage of it and make changes.”

The fledgling program started because of a need for help. Smith continually heard from players about ratings — some form of “my overall rating is too low”; “my speed is off”; “I’m not aware enough in the game” — and sought a way to fix it.

He knew the value of in-person evaluations over relying strictly on the hours of film he and others watch each week to keep ratings current. It would also give some of the Madden team a chance to discuss with individual players aspects of their game and ratings.

This is where things can get a little more difficult for Madden NFL ratings adjusters, who only get the job by recommendations to Dustin Smith from “former players or those who have worked with Madden for years.” From there, candidates need to go through a thorough observation test to make sure they’ll provide data that can improve the overall accuracy of player ratings. Or, as ESPN put it:

They must have an idea of how ratings work and how what they are seeing on the field correlates to ratings in the game. For example, an adjuster needs to know what a 94 speed looks like versus a 90 speed and have a knowledge base of football beyond the basics. Smith said he hasn’t had to reject anyone yet.

Naturally, Madden NFL ratings adjusters have some pretty memorable interactions with actual players, who see their jacket — which isn’t exactly a secret about what they’re doing there — and then get approached. The first person to do it? According to ESPN, it was Jacksonville Jaguars running back Leonard Fournette, who thought his rating should be higher than an 87 overall.

“We’ve kind of wanted to do something around players and ratings at games and stuff like that,” Smith said. “But then the Fournette thing gave us a good opportunity to go up there during training camp this year and do, kind of, put a forward-facing event like, ‘Hey, we’re listening. We’ll hear everything you have to say. You can show off, too, everything you think should be higher.’

Smith said Fournette put together a compelling case for changing some of his initial ratings in the game — explaining his speed and agility compared to teammates and other players around the league. He mentioned his strength and displayed confidence in his abilities and that he should have been an overall 90.

The confidence mattered. It was in fun, but the truth also came out.

“In the end, he really hit us with the, ‘I’m just upset that I’m at 87 because my friends just keep calling me Mr. 87,'” Smith said. “Like, in the end, it was a really funny end to the conversation.”

That’s kind of expected, right? One that Dustin Smith didn’t think would ever happen? A player, in this case Ryan Fitzpatrick of the Tampa Bay Buccaneers, telling the lead ratings adjuster that his rating was too high.

Then Ryan Fitzpatrick walked up and said something Smith had never heard before: His rating was too high.

“And then just walked off,” Smith said. “That was, by far, the weirdest one I’ve ever gotten. It’s one of my favorite stories.”

Fitzpatrick didn’t remember the interaction, but admitted if he did that, he was potentially referring to his speed, saying “they probably got me too high.” Smith said he didn’t lower his rating.

In addition to being badgered by NFL players about their overall or category ratings, Madden NFL ratings adjusters do get real feedback from players and even some front-office people from NFL teams. So, while they’re at the game to keep a close eye on player performance, they also bring back notes that can be used for the following year’s release — so, when you’re playing, some of the features could be from the mouths of your favorite player, which is pretty awesome.

Madden NFL talent adjusters admit that they have “the best job in the world,” and are often told that by everyone they come in contact with. But the responsibilities and ability to trust your football knowledge comes into play every single week, so it’s not all a bed of roses. Actually, it’s kind of like bring a scout — but one who every single NFL player knows is there and will try to influence.

To check out the full feature, head on over to ESPN.com.