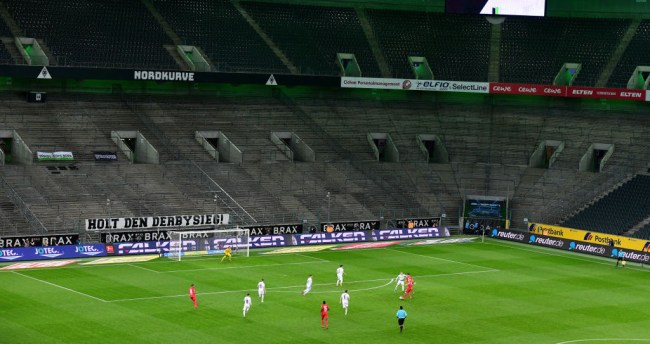 In case you haven’t heard, a handful of sports around the globe have begun to resume in recent weeks, such as NASCAR, the Korean Baseball Organization, and the German Bundesliga.

As a big #SoccerGuy, I watched every Bundesliga game this weekend, and let me put this simply: it was utterly fantastic.

Green grass, a ball, and athletes doing athletics — that’s all it takes to make me happy, folks. However, while the play on the pitch and the aesthetic of the match itself was enough to keep me entertained, the lack of fans, and therefore atmosphere, was far more glaring and off-putting than I expected it to be.

If the audience were able to comprehend what the players were saying, that’d be one thing, but the audio from the pitch essentially amounted to intelligible grunts and shouts. So, how should American sports — which will surely face these same issues — cope with them?

Super TV producer and Embassy Row CEO Michael Davies — who is perhaps best known for producing Who Wants To Be A Millionaire? — laid out exactly what he’d do to make these fan-less broadcasts less eerie during this week’s episode of Men In Blazers, the soccer podcast he co-hosts with sportswriter Roger Bennett.

“For the in-stadium work, why have you got a public address system? I thought it was fake and unnecessary. You don’t need to do things for the public address because there’s no public in the stadium for it.

I thought the sound was pretty good — you could feel the microphones picking up the ball. Yes, maybe a few more close shots, but players aren’t speaking anyway. They might need to use more slow-motion, more close-ups.”

When Davies was asked about the idea of artificial crowd noise, he was staunchly against the idea: “No, absolutely not. Don’t do anything that’s fake. You’ve got to cover it like it’s real.”

As for how to make the games more compelling (trust me, unless you gamble on them or are rooting for your favorite team, sports without fans just doesn’t have that same juice), Davies said he expects broadcasters to really zero in on the “stories” of the teams and players themselves, in an effort to make sports more “narratively” driven.