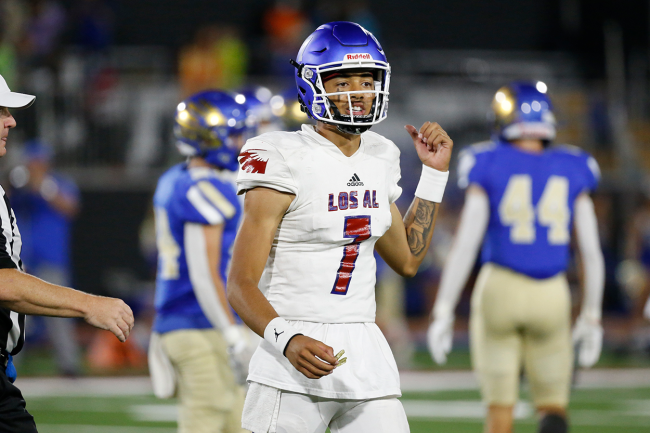 Malachi Nelson is the second-highest ranked college football recruit in the Class of 2023 by most recruiting sites, but ESPN has him as the No. 1 player in the country ahead of Arch Manning. The five-star quarterback, who is currently committed to USC, was once committed to Oklahoma.

Nelson, who is from Los Alamitos, California, announced that he was going to play for Lincoln Riley and the Sooners in July of 2021. When Riley left for Los Angeles, Nelson decommitted from Oklahoma on the very same day.

While it seemed like a done deal that the California kid was going to stay in-state, that may not be the case. Nelson is taking an unexpected visit this weekend.

According to multiple sources, Malachi Nelson is taking an unofficial visit to Texas A&M. The Aggies have never been considered to be significantly in the mix for the nation’s top/second-ranked quarterback. It is a surprise.

Eli Holstein, one of the top 10 quarterbacks in the Class of 2023 had previously been committed to play for A&M. He ultimately chose to flip to Alabama.

As a result, Jimbo Fisher and his staff are looking for his replacement. Nelson would not only be that, but he would be considered a massive upgrade.

The motivation for the visit is unclear and NIL brings an interesting wrinkle to the process. Nelson partnered with a major hospitality and restaurant company in Los Angeles earlier this year. College Station, of course, is not L.A., so it would be interesting to see how that would shake out if Nelson was to flip.

Would he be able to keep a deal in California while playing in Texas? Would the company want to keep him on?

With that said, we know that NIL at Texas A&M is not limited, so he would be just fine financially. And as of now, Nelson remains a Trojans commit.