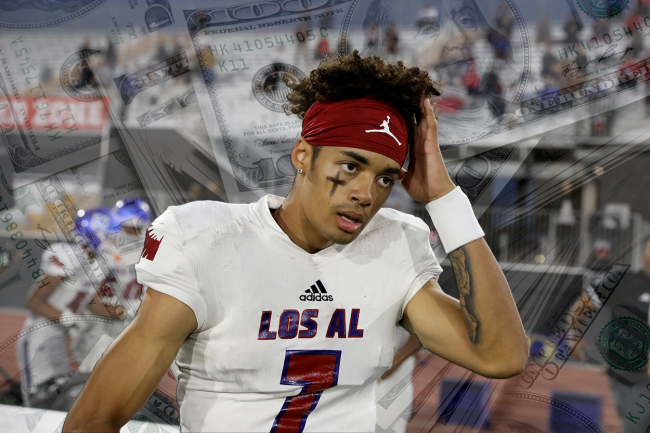 Malachi Nelson was one of the first recruits to flip his commitment from Oklahoma to USC after the Trojans hired Lincoln Riley away from the Sooners. The California-native is the No. 2-ranked recruit in the country behind only Arch Manning.

As such, his Name, Image and Likeness opportunities are sure not to be limited. He is a five-star quarterback going to a school in Los Angeles that has its own in-house creative lab and recently partnered with a third-party agency to help facilitate deals. In addition, Riley is making direct pleas to provide NIL opportunities for the athletes.

Should Nelson choose to pursue as many NIL deals as possible, he will have plenty of options to choose from. However, that isn’t the first thing on his mind and as he goes down the NIL path, it isn’t just about the money.

Malachi Nelson is taking a careful approach to cashing-in on NIL and recently struck his first announced deal.

He is partnering with The h.wood Group, a major hospitality and restaurant company that has 13 restaurants and nightlife venues in Los Angeles. In particular, The h.wood Group incorporates SLAB, a popular barbecue spot that ranks among Nelson’s favorites.

That is where he finds his first official partnership.

For Nelson, he told The L.A. Times that having a connection to his NIL deals is important to him. It’s not necessarily about the biggest paycheck.

“A lot of people, they just see money and they take it,” Nelson said to The L.A. Times. “That’s not where my head is at. I want to take deals that align with my beliefs and what I think and what I like. Not doing things solely for the money, but something I can really connect to and be genuine in putting out.”

Although the specific terms of Nelson’s deal are not public, it is likely a comfortable return for the future USC signal-caller. He will promote the group on social media, partner with different restaurants on menu collaborations and host tailgate events that feature the restaurants this fall.

While discussing his new deal with The L.A. Times, Nelson threw shade at other programs across the country. He said that NIL did not factor into Riley’s pitch to get him to flip from Oklahoma to USC and did not even have a conversation about NIL, which is something that he can’t say about other schools.

“I know there are a lot of schools out there where that’s the first thing they’ll talk about,” Nelson told The L.A. Times. “‘We’ll give you this much, we’ll do this, whatever, just to get you here.’”

Despite the fact that he says USC didn’t put NIL at the forefront of his recruitment, the five-star quarterback is set to make a killing through Name, Image and Likeness, should he decide to do so. He’s already well on his way.