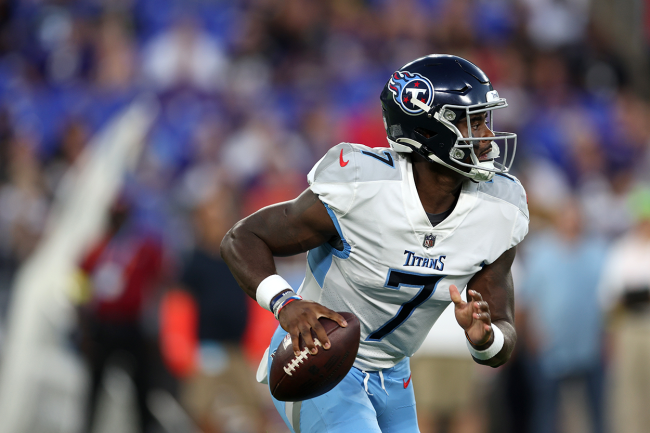 Malik Willis’ NFL debut (in the preseason) was very up-and-down. He had moments of greatness, but head coach Mike Vrabel wishes that he would have thrown the ball more.

Willis, who was supposed to be a first round draft pick according to the media, did not hear his name called in April until the third round. The Titans drafted the 23-year-old out of Liberty with the No. 86 overall pick.

A large reason that Willis slid so far was because, although there were flashes of his potential, his tape in college wasn’t there. He often abandoned the play and tried to make something happen with his legs against inferior opponents— especially in comparison to the NFL.

That was exactly the case on Thursday night as Tennessee traveled to Baltimore to begin the preseason.

Willis got the start and had a few stand-out plays that will have Titans fans chanting for him to come in the second that Ryan Tannehill does anything wrong. It won’t be the right time to put him in, but football fans are not always the most rational.

The first touchdown of Willis’ career came in the second quarter when he somehow avoided an overwhelming rush, spun to the far side and ran it in. It was a really great play.

Not long thereafter, Willis connected on a bomb.

Later in the second quarter, he rolled out off of the play-action and whipped a sidearm throw for a first down.

It also was cut short. Vrabel benched Willis early in the third quarter because he would not throw the ball.

Vrabel on taking Willis out after the second play of the third quarter: I wanted him to throw the ball. He didn't, so we put in Logan

While it might not make sense as an outsider, when you look deeper at the film, what Vrabel said makes sense.

He left the pocket way too early and got stuck in no man’s land on 3rd-and-5 in the first quarter.

Look at the protection around Willis before he abandoned the play.

Checking in on Malik Willis pic.twitter.com/CxhYKMzBH6

The play that put Willis on the bench was a pass play that was called on second-and-4 from the Tennessee 37-yard line. Willis didn’t see any options downfield and legged it across midfield.

This was the last snap of the night for Willis. Also had a DRIFT concept front side (other example from earlier in the game below) pic.twitter.com/RJLOx9k15u

It was a great play but it was not what his head coach wanted. Vrabel sat him immediately after the play and had an honest evaluation of his rookie during his postgame press conference.

While Willis’ ceiling is special, as we saw on Thursday, there is still a long way for him to get to where he needs to be on the next level. Rather than immediately bailing on plays after throwing a few interceptions, he needs to be better about standing in the pocket and delivering.