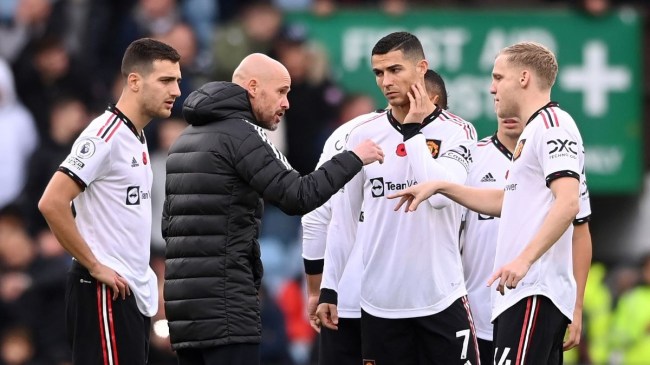 Ronaldo gave a shocking interview with Piers Morgan over the weekend. He claimed in the interview that the club that turned him into a superstar has since “betrayed him.”

EXCLUSIVE: Cristiano Ronaldo tells Piers Morgan he feels like he's being forced out of Manchester United in an explosive interview.

The five-time Ballon d’Or winner as the world’s best player took shots at the club’s ownership, past and present managers, and even some of his teammates. He claims the club has made him a scapegoat for its early-season struggles.

But now the club is hitting back.

Manchester United notes the media coverage regarding an interview by Cristiano Ronaldo. The club will consider its response after the full facts have been established,” the club said in a statement on Monday. “Our focus remains on preparing for the second half of the season and continuing the momentum, belief and togetherness being built among the players, manager, staff, and fans.”

But Dawson’s report states that things aren’t as calm behind closed doors.

The 37-year-old claims United and Ten Hag wanted to “force him out” in the summer. But sources have told ESPN that during the transfer window, United were made aware that the striker’s representatives were actively looking for a move away.

United have also taken issue with Ronaldo’s claim that their Carrington training base has not been updated since he was last at Old Trafford.

Sources told ESPN that the pool, canteen and recovery areas have all been revamped, while more than £200,000 was spent to build a state-of-the-art analysis and meeting room at the specific request of Ten Hag.

Manchester United, Ronaldo Both Look Toward The Future

Manchester United now have a long break before its next competitive match. While Ronaldo will play for Portugal in the 2022 FIFA World Cup. The Red Devils are currently fifth in the English Premier League. They sit three points behind Tottenham Hotspur for fourth. A fourth-place finish would seal a return to the UEFA Champions League after missing out a year ago.

Ronaldo, meanwhile, appears on his way out of the club in January. The Portuguese star is heavily linked to a move to Chelsea FC. American owner Todd Boehly is reportedly an admirer of the forward and believes he can fix the Blues,

A move to the US and Major League Soccer is also not out of the question. Fellow superstar Lionel Messi is reportedly likely to join David Beckham’s Miami FC after the World Cup. Could the league add not one, but two generational superstars in 2023? If so, it would be an absolute coup for the league ahead of the 2026 World Cup in the US.

But it’s clear there’s no turning back for Ronaldo in Manchester.