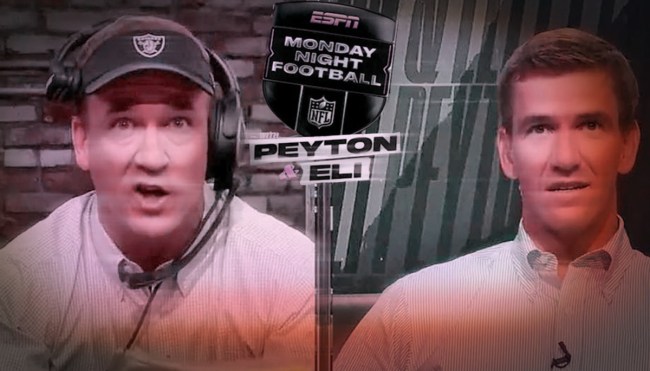 You’d be hard-pressed to find many football fans who didn’t appreciate the introduction of the Manningcast, a refreshing alternative to your standard Monday Night Football presentation that provided Peyton Manning with a chance to figuratively let his hair down over his giant forehead with his brother Eli at his side.

In addition to providing insight into the contest, the Manning Bros also gave us some solid entertainment thanks to the many guests who joined them on the broadcast—including a number of NFL players who might think twice about accepting the invitation again based on what unfolded after they popped in.

Earlier this season, fans were alerted to a hot new jinx in the streets in the form of the “Manningcast Curse.” When the Buffalo Bills lost their game in the week following Josh Allen’s appearance, it marked the sixth straight contest a team dropped after an active player chatted with the Mannings—a streak that stretched to seven after the Packers lost to the Lions on Sunday in the wake of Aaron Rodgers stopping by.

The Manning Curse: Players are 0-7 after coming on the ManningCast.

Now, you could argue that final game is deserving of an asterisk, as Rodgers only played in the first half of Sunday’s game against the Lions in what was essentially a meaningless showdown for a Green Bay team that had already clinched the top seed in the NFC after defeating the Vikings in Week 17.

With that said, it’s much more fun to ignore that fact and tell yourself the Manningcast Curse is very, very real.