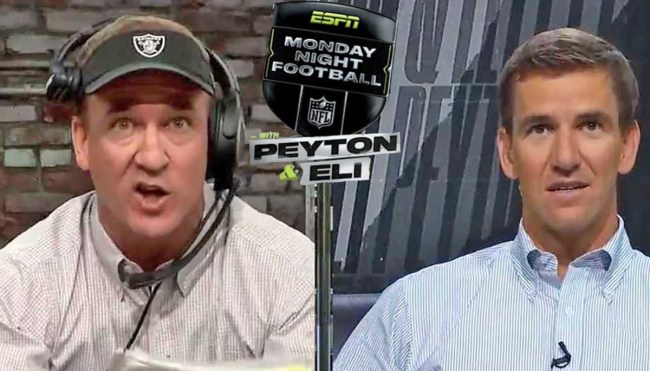 The world of sports is filled to the brim with superstitions that a lot of athletes will go out of their way to avoid falling victim to in addition to a number of alleged curses that come with being featured on the front of an issue of Sports Illustrated or tapped to grace the cover of the newest installment of the Madden franchise.

Tom Brady has managed to avoid succumbing to that second jinx this season (at least so far), but it would appear it’s still at least somewhat alive and well based on the cliff Patrick Mahomes has plummeted off since joining him on the cover of Madden 22. With that said, Brady wasn’t immune to a new curse that remains undefeated after claiming yet another victim on Sunday: the “Manningcast Curse.”

For the uninitiated, the bulk of this year’s Monday Night Football games have featured a simulcast on ESPN2 where Eli and Peyton Manning engage in some wildly enjoyable banter alongside the many high-profile guests that have stopped by what has been dubbed the “Manningcast.”

However, the active NFL players who’ve joined them so far haven’t experienced the most enjoyable results in the games they’ve played immediately after appearing on the Manningcast, as Brady, Travis Kelce, Russell Wilson, Matthew Stafford, and Rob Gronkowski all suffered a loss in the week following their segment with the Manning Bros.

On Sunday, Josh Allen had a chance to break the Manningcast Curse but instead became its most notable victim yet thanks in no small part to the performance of a different Josh Allen. Thanks to what unfolded on Sunday, the Bills quarterback is now the sixth consecutive player that’s been claimed by a jinx that’s become virtually impossible to ignore.

The Manning Curse: Players are 0-6 after appearing on the ManningCast this season.

The Mannings will be taking a break this week and it’s unclear when they’ll be making their grand return to Monday Night Football, but you have to imagine any player who agrees to accompany them when they do will have a hard time ignoring the implications of doing so.