Peyton, Eli, And Jimmy Johnson Produce All-Time Awkward MNF Moment As They Repeatedly Talk Over Each Other On The ‘Manningcast’ 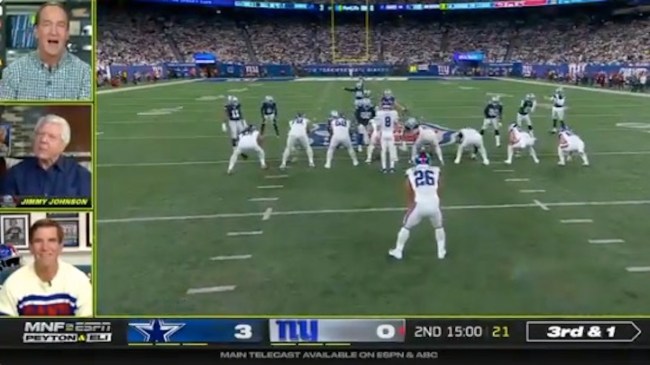 Ever since it premiered last season, NFL fans have largely loved ESPN’s Manningcast, which features brothers and NFL legends Peyton and Eli Manning chopping it up in a far more relaxed format on ESPN2.

From an insight and entertainment perspective, it’s an absolute delight. But there are always two sides to every coin, and from a technical and productional standpoint, it’s something of a nightmare, as evidenced by this wildly cringeworthy moment between the Manning brothers and former Dallas Cowboys head coach Jimmy Johnson on Monday night.

At the start of the second quarter, the trio experienced what’s best described as the narrative version of two people bumping into each other on a sidewalk and then simultaneously trying to walk in the same direction. This lack of broadcasting finesse resulted in the cardinal sin of the live television game: dead air space.

Peyton Manning, Eli Manning, and Jimmy Jonhson are a producer’s nightmare as the trio won’t stop talking over each other in this awkward Manningcast moment

It’s 2022. Can we figure out digital delay? After all the progress, is ISDN still better? #ManningCast interviewing Jimmy Johnson.

The fellas constantly tripping over each other on the Manning Cast is a podcast producer’s worst nightmare.

Watching #MNF for the first time on @ESPNPlus with the #ManningCast. I like them calling the game but not sure about the interviews. Them not understanding the delay during that Jimmy Johnson segment didn’t help. They all kept tripping up over each other.

Luckily for the Brothers Manning and the Super Bowl-winning Johnson — who brought two Lombardi trophies to Dallas before Jerry Jones infamously replaced him with Barry Switzer — absolutely no amount of Zoom-related stumbling and bumbling will ever be as awkward as the Joe Tessitore and Booger Macfarland Monday Night Football booth from a few years back, so at least they’ll always have that in their back pockets.

Plus, as football fans have come to expect from the Manningcast it was also filled with fascinating anecdotes as Johnson revealed he tried to trade up to select Peyton in the NFL draft when he was the head coach of the Miami Dolphins.

.@JimmyJohnson tried to trade up for Peyton while in Miami 😳 pic.twitter.com/62raoMX3vw

ESPN has Peyton and Eli signed up for ten Manningcast streams this season, including one of the playoff games that the network will air.

RELATED: Eli Manning Is Once Again Going Viral For Apparently Being The Chillest Dude To Ever Exist