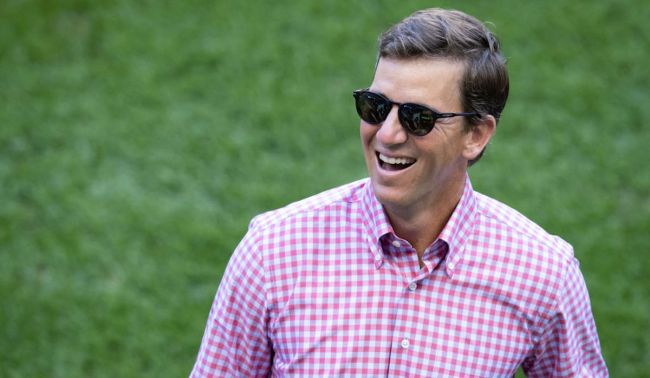 While I don’t speak for all New York Jets fans, I likely do speak for all (well, most) New Yorkers/Northern New Jerseyans: Eli Manning has always been impossible to not like, and now that he’s retired from the NFL and is showing off his personality more on television, the rest of the country is now coming to realize it, too. Think about it: not everyone survives, let alone thrives, in New York City, but Eli Manning did.

Whether it be his banter with his brother Peyton on the Monday Night Football Manningcast, flipping the bird while on national television or his hilarious Twitter game, Manning has been endearing himself to the greater football world ever since he hung up the cleats and shoulder pads.

This latest example of Manning’s likability is perhaps the folkiest yet as the 41-year-old — in a TikTok presented completely without context — simply can’t contain his glee while discussing his… pockets. He also scored massive bonus points for saying he’s “Eli Manning from *New Jersey*.”

“I forgot how funny of a dude Eli is,” stated another.

I forgot how funny of a dude Eli is. https://t.co/paGJvXcr06

The best explanation of Eli might come from this dude, though, who says “Eli just out here kickin’ it.”

One football fan pointed out that “Eli [is] quickly turning into a legend post-career.”

“There’s being a good sport, then being an absolute mensch,” aptly stated this Twitter user.

There’s being a good sport, then being an absolute mensch. https://t.co/9p6UOFcki1

This man beat Tom Brady in the Super Bowl TWICE

Who knew how likeable this guy would become https://t.co/hUwTLPiKcJ

The viral TikTok of Eli comes just a couple of days after Ohama Productions — Peyton Manning’s production company that’s put together the Manningcast and ESPN+ series such as El’s Places — put together the hilarious “Chad Power” viral video that saw the youngest Manning brother trying out for Penn State’s football team.