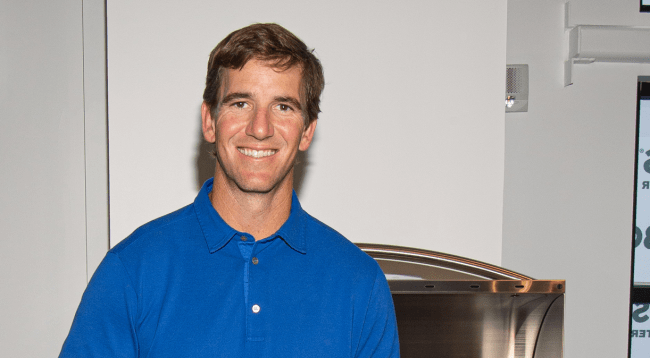 As football fans have come to learn, Eli Manning is low-key one of the funniest dudes in sports.

His dry sense of humor was often on display during his 16-year NFL career quarterbacking the New York Giants.

However, it was when he teamed up with his equally famous brother Peyton Manning on Monday Night Football for ESPN’s “Manningcast” that fans really got to see him let loose.

Eli Manning’s other foray into the world of television since retiring sees him traveling to college campuses, visiting various football programs.

This week, during his visit to Penn State for the show, Eli’s Places, Manning showed up at an open tryout disguised as a walk-on named “Chad Powers.”

Covered in prosthetics, a wig, and a really dope mustache, Eli didn’t “make” the team (he ran a 5.49 40-yard dash), but did confuse and entertain the Nittany Lions coaching staff and the other players.

On Monday, Eli Manning spoke to the New York Post about how the whole thing happened.

“I wanted to see if the coaches would be interested in me,” Manning told The Post. “Head coach James Franklin was in on it, but didn’t really tell any of the other coaches.”

“By the end of it, he knew something was going on, just because of the way I looked, and how I was telling receivers what routes to run and how to run them — and I was talking some football lingo that I shouldn’t know, but knew coaches would know,” Manning said. “I’m sure they’re not getting what ‘read’ many walk-ons are working on.”

We thought Chad Powers looked familiar…@EliManning went undercover as a @PennStateFball walk-on and it is everything. pic.twitter.com/5i5eD22lO7

As for all the goofy things Manning ending up telling people at the tryout, like he was coached and home-schooled by his mom, Eli says that was all ad-libbed as there was no script.

And other than the wig getting in his eyes when he started to sweat, his only real concern, he says, was hurting himself.

“I knew I could still throw — it’s like riding a bike, and you never forget how to throw a football,” Manning said. “But it wasn’t really until that day that I was told I’d have to run a 40, do a 5-10-5, do a broad jump, triple broad jump. My number one concern of that was don’t pull a hamstring. It doesn’t matter what I run, the slower the time the better really.”