Manny Pacquiao Had To Be Spoon-Fed, Couldn’t Open His Eyes After Getting Beat Up By Yordenis Ugas 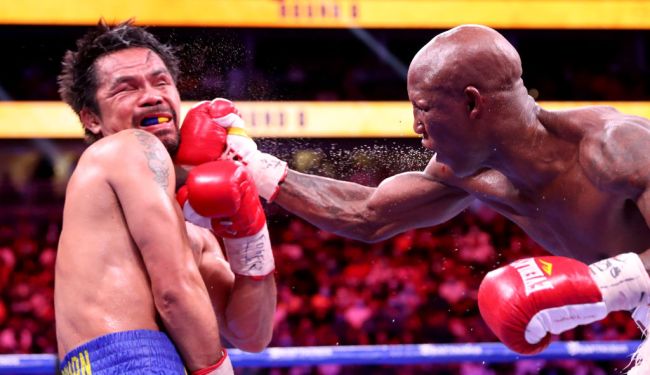 Manny Pacquiao is one of the greatest boxers of all-time and holds a professional record of 62-8-2 with 39 wins by knockout. His most recent fight, his seventh loss, was brutal.

The 42-year-old Filipino faced cuban boxer Yordenis Ugas and got worked for 12 consecutive rounds. Ugas was a last-minute replacement for Errol Spence and peppered Pacquiao all night.

In addition to clinically picking apart the welterweight legend, Ugas gave him quite the beating. Pacquiao suffered a cut over his left eye that required five stitches and had blurry vision in his right eye.

His wife, Jinkee Pacquiao, shared a video to instagram of her husband after the fight and it looked rough. Pacman seemingly could not open his eyes. Thus, because he couldn’t see, he had to be spoon fed.

Jinkee’s message about marriage was very sweet, but her husband looked rough.

Pacquiao, who has boxed professionally for 26 (!!) years, is now a Filipino senator and has his eyes on a presidential run. After his loss to the 35-year-old Cuban, who he called one of his worst opponents, Pacquiao signaled that his career in the ring may be over.

“Let me rest first before my family and I make a decision,” he said.

Seemingly in disbelief over the loss, Pacquiao claims that his legs were not cooperating when he tried to move around the ring. He also got hit in the face for 12-straight rounds.

Ugas indicated that he would be willing to give his opponent a rematch that would take place in January. Pacquiao has not ruled it out.