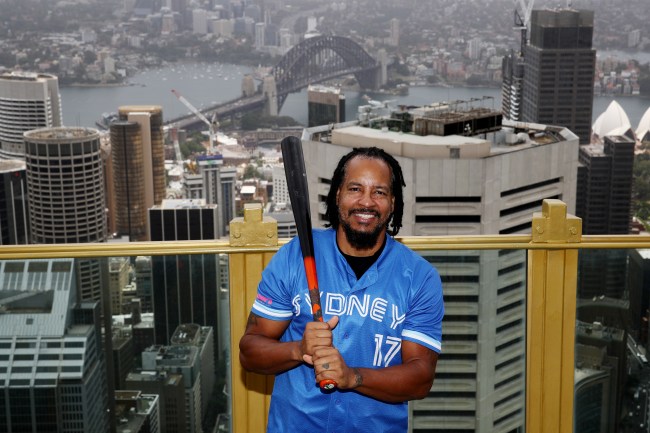 Manny Ramirez easily makes the top 5 list of my favorite professional baseball players. He was one of the most exciting players to watch in person because you never knew what was going to happen. One of those guys who could go yard whenever he wanted because he had some grudge with the pitcher but also a guy who appeared as if he was never actually trying hard and putting forth any real effort. He also reportedly spiked his teammates’ drinks with Viagra before playoffs games.

At 48-years-old, Manny is back. He’s signed on to play with the Sydney Blue Sox in the Australian Baseball League and their season begins this week. Funnily enough, Red Sox “fans” in Australia might have no clue who Manny is despite him being one of the greatest players in Red Sox history. This Tik-Tok video of an Aussie wearing a Red Sox fan having no idea who Manny was recently went viral:

ESPN published an article yesterday about the hype surrounding Manny’s return to baseball:

Sydney manager Shane Barclay said the two-time World Series winner’s preparation for the season — his team opens the season against the defending champion Melbourne Aces — could not be faulted.

“We knew there’d be a Manny show but it’s been a pleasure,” Barclay said Wednesday. “The buy-in from [Ramirez] has been magnificent and just watching him swing a bat, you’re going, ‘There’s no way this guy is 48.’

“He’s an incredible athlete. He’s legit and here to play and bought in in every way. He’s going to hit some long balls this season.” (via ESPN)

Manny hasn’t played in the MLB since 2011 when he was handed a 100-game suspension for violating the league’s drug policy, a suspension that was later reduced to 50-games. I don’t know jack diddly squat about the Sydney Blue Sox other than I’ve been a fan of the team my entire life. It doesn’t matter that the franchise was created in 2009, the Blue Sox have always been in my blood. World’s 1 fan. That’s me.

The Blue Sox missed the playoffs last season after getting hit hard with the injury bug and they struggled to produce just 5 wins in their final 22 games according to ESPN. That will all change this season with Manny putting on the #24 jersey for the Blue Sox.

The Sydney Blue Sox could use some help in the merch department. I’m not exactly loving the options in the team store but I suspect there are probably some excellent bootlegged items out there on sites like Etsy. I just need some more time to dig around.

Manny’s back. Life is good, at least for today.