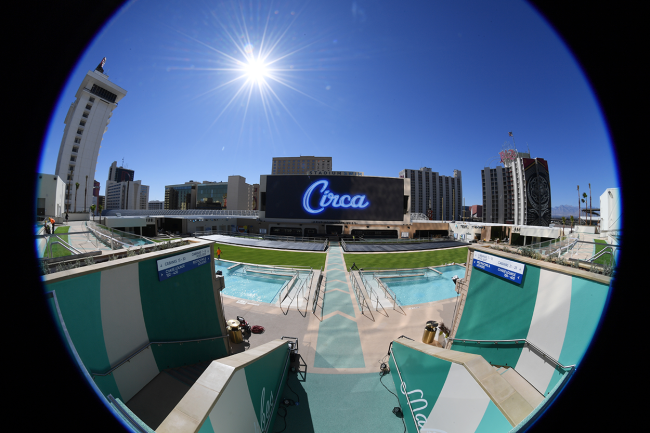 The first four days of March Madness are the most action-packed days in sports. Unlike any other day, week or month in sports, there is a one-and-done college basketball game on TV for upwards of 12 full hours per day.

TBS, TNT, CBS and truTV constantly rotate First and Second Round matchups and just when one game finishes with a buzzer beater, another one possession game is coming down to the final four minutes. It’s the best.

As a result, the first four days of the NCAA Tournament are amongst the most popular to schedule a vacation. For those who love the allure of bright lights, fancy drinks, and the occasional (or frequent) wager, there is no better place to spend March Madness than Las Vegas.

In particular, of the many sports-watching venues on planet earth, Stadium Swim is amongst the best. The open-air, pool amphitheater is part of the Circa Resort and includes the best of both worlds — a pool party and a sportsbook.

There are few better places to spend the first four days of March Madness and the crowds flock to the pool to watch every game at the same time. However, of the hundreds of swimsuit-clad hoops watchers this weekend, the vast majority were dudes.

If you're looking for the party, it seems to be here. pic.twitter.com/3hIcM7n42I

The set-up is epic, the screens couldn’t be better-suited for March Madness.

And the vibes were immaculate.

Here was the scene on Saturday for the Second Round, try to count the women:

Welcome to #ManiaUnderTheSun. 🏀
Let’s have some fun at the best pool on Earth. ☀️ pic.twitter.com/PO9MNwqFcn

March Madness is one of, if not the most wonderful time of the year for sports and it is peak guys being dudes season in Las Vegas.