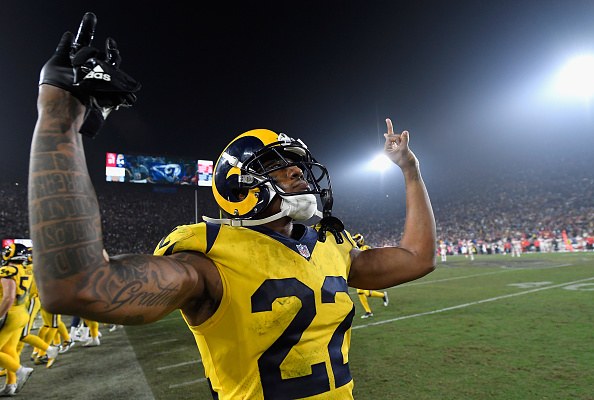 In the middle of last night’s Rams-Eagles game, some random fan thought it was a good idea to yell obscenities Peters way while he was on the bench. Peters heard the trash and immediately got up from his seat and confronted the trash talking fan in the stands.

Despite the tough guy act on the bench Peters got mocked by the Internet for his poor play last night.

He wont tackle (even on the goal line), but will try and fight a fan. #LARams need to cut their losses and release Marcus Peters. He's a disgrace to our organization. #Rams #RamsHouse #RamsNation pic.twitter.com/9cSaqSpyzu

Hey @marcuspeters you should concentrate on covering WRs on the field, not the fans in the stands. #SorryAssCorner 😂😂😂 https://t.co/OBDRdJ39In

Most fight he showed all that game, along with his team

The closest he got to making contact all night.

If only he had that same energy on the field:https://t.co/5DWJataFXY

Dude is a head case. Gets toasted weekly. Instead of flapping them jaws he should focus on improving.