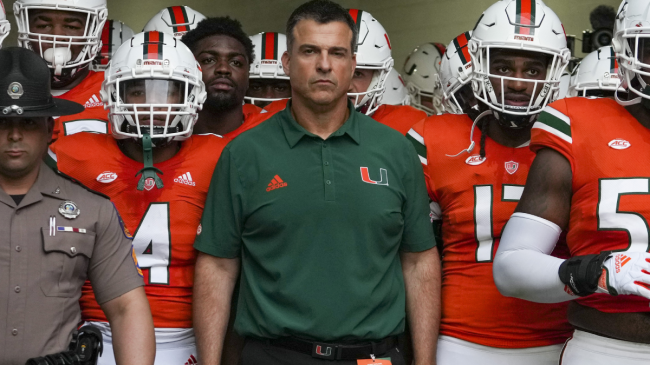 In this day and age of social media, controlling a locker room can be difficult for college football coaches. That task becomes even tougher when the parents of those players openly voice their frustrations with their kids’ playing time or production on the field.

That’s something that Miami head coach Mario Cristobal has been dealing with in Year 1. After coming to Coral Gables from a successful Oregon program, many believed he’d provide an instant turnaround for a Hurricanes team that’s been in neutral.

Since joining the ACC, Miami has cycled through five different coaches. They’ve landed only one 10-win season while finishing ranked in the top 25 just four times in the last 16 years. Cristobal went 35-13 with the Ducks, and he became a splash hire that excited the fanbase in South Florida.

Unfortunately, those fans are learning that success takes time. Miami is 5-5 in Mario Cristobal’s first season, having lost to Conference USA affiliate Middle Tennessee State and a 3-7 Texas A&M team. Assuming they lose to No. 9 Clemson next Saturday, the Hurricanes will be fighting for bowl eligibility in the season finale versus Pitt.

A far cry from the ACC title aspirations the program had upon entering the year.

With those struggles has come criticism. Criticism from media, fans, and parents of players on his roster. Following last week’s win over Georgia Tech, the father of DB Khamauri Rogers lashed out at a member of Cristobal’s staff. He singled out secondary coach Jahmile Addae in a now deleted post.

“@coachaddae: you are a piece of work but it’s all good. I’m going to pray for you and your family; you obviously have serious issues.”

It wasn’t the first time a parent of a player has called out the Miami coaching staff. Earlier in the year, wideout Key’Shawn Smith’s mom criticized offensive coordinator Josh Gattis.

“If you [are] an offensive coordinator who walks in [a] meeting [and] tells his team they are the Worst Team ever! Would you still want to play for him[?] I heard of tough coaches but [that’s] just stupid. I wonder if USC coach [talks to] his team like that.”

While these types of comments can create an awkward tension in the locker room, Mario Cristobal hasn’t let it affect his staff. He was very blunt in his response to those parents taking shots on social media.

“As it relates to posting on social media, I was raised very different than anything that would relate to anything such as that. A parent is free and welcome to pick up their son if they’re not happy with their playing time at the University of Miami. That’s my philosophy.” -Mario Cristobal

As it should be.

Coaches have more to deal with than the approval of every parent, and with the transfer portal readily available, playing time is easy to find if you’re unhappy with your spot on the depth chart.

As for Cristobal, he’ll focus on finishing Year 1 strong. That starts next weekend against the Clemson Tigers.