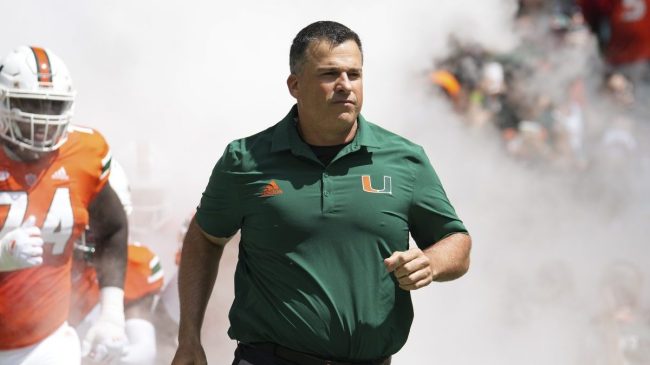 It appears that may already be trouble in paradise.

Miami Hurricanes fans were over the moon when the university poached head coach Mario Cristobal from the Oregon Ducks. Cristobal is a Miami native who played for two national title-winning Hurricanes teams in 1989 and 1991. He’s also one of the nation’s best recruiters.

That recruiting was on full display when he helped lure Jaden Rashada, one of the top quarterbacks in the 2023 class, to Miami over in-state rival Florida.

The combination of strong recruiting and the return of quarterback Tyler Van Dyke, who some projected as a first-round pick in the 2023 NFL Draft, had Hurricanes fans fired up heading into the college football season.

But things have quickly fallen apart.

The Hurricanes dropped a dud in their biggest non-conference game of the season in Week 3. Miami struggled to get anything going offensively and lost to host Texas A&M, 17-9.

But a home game against Middle Tennessee State in Week 4 offered the Canes a chance to get back on track. That is, until it didn’t.

Van Dyke began the game 0-for-2 with two interceptions and the Blue Raiders raced out to a quick 10-0 lead.

Things only proceeded to get worse for Miami. The Canes responded with a field goal to make it 10-3, but MTSU then put together back-to-back touchdown drives and took a shocking 24-3 lead early in the second quarter.

The shine wore off of Cristobal quickly, as fans already want him fired and compared him to previous coach Manny Diaz.

One fan went so far as to call him “Mario Diaz.” While a different fan compared him to another former Canes coach, Al Golden.

Cristobal is in the first year of a reported 10-year, $80 million contract. So Canes fans might want to settle in for a potentially bumpy ride.