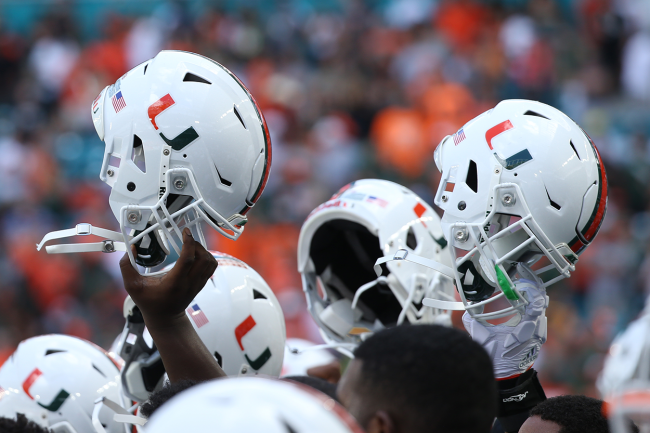 Miami football is complete and utter chaos at the moment. The Hurricanes do not currently have an athletic director and are in between head football coaches.

On Nov. 15, the university fired athletic director Blake James after 17 years. It chose to retain head football coach Manny Diaz. And then it was a game of limbo.

Despite the fact that it already had a head coach, the school reportedly a extended a lucrative offer to Oregon head coach Mario Cristobal to be the next skipper. Attached to the deal is a large staff salary pool.

Cristobal has been told he will have very large budget to hire assistant coaches. That has been part of discussions last few days.

Should Cristobal go on to accept, he was set be the coach and Diaz was be fired. Should he have declined, Diaz would still be the coach.

Mario Cristobal has a deadline of midday Monday to accept the UM job, sources tell @SInow. If he declines, Manny Diaz will be retained, as @flasportsbuzz reported.

Final decision on AD – where Dan Radakovich is top candidate – will be made after the coach situation is resolved.

Well, after the dust settled, Diaz was fired on Monday.

With the decision, the Hurricanes are set to pay out a lot of money:

All of this back-and-forth aside, there is one major question surrounding the entire thing—

Where did Miami get all of this money?

As of just a few months ago, the general understanding was that Miami’s athletic budget was not of the substance that it was during its hay day. The U was not considered poor by any stretch, but there were questions about the money that could be thrown toward a new coach. As a result, Diaz was expected to be retained because it would cost less.

However, out of seemingly nowhere, the Hurricanes were slinging big numbers around the coaching carousel. Now we know where it came from.

Mike Ryan Ruiz of the Dan Le Batard Show was the first to report that Miami was set to pump an additional $20/30 million into the program.

“..Miami is going to pump in an additional twenty to thirty million dollars into the football program.” – @MichaelRyanRuiz on the changes being made and the potential future of Miami Hurricanes football.
🎙 https://t.co/mITYkvP2ge 🎙 https://t.co/CUANTChR42 pic.twitter.com/zFgIpiok9t

As he mentioned, the success of UHealth has a lot to do with that.

We now know that’s exactly where the money is coming from.

In addition to promises from big-time boosters, the football program will receive a large financial supplement from the University of Miami Health System.

Great piece by @PeteThamel on where all the new money came from in Coral Gables to pay for buyouts and for the new head football coach https://t.co/2IPqBnvAZe pic.twitter.com/sN8LNXVt3G

Despite a down financial year in athletics due to the COVID-19 global pandemic, the UHealth system did very well. The tie to the health system helped the entire university bounce back from a budget dip.

Now, this is purely speculation for legal purposes, but the math seems to add up. If the UHealth system had a big year during the COVID-19 pandemic, would a large part of that economic success not come from COVID-19? In turn, is Miami not using COVID-19 money to fire, hire and pay its current and former football coaches?

Put another way: The unprecedented financial gains of a hospital because of the worst global pandemic in a century is why The U finally has the funds to go after a rival college football coach… https://t.co/nma97eUWCF

Regardless of where the money is coming from, Miami has never come close to paying this kind of money. This entire head coach situation is a complete shift in athletics and football support, with a lot of that money coming from UHealth’s unprecedented success during the COVID-19 pandemic. Really makes you think.