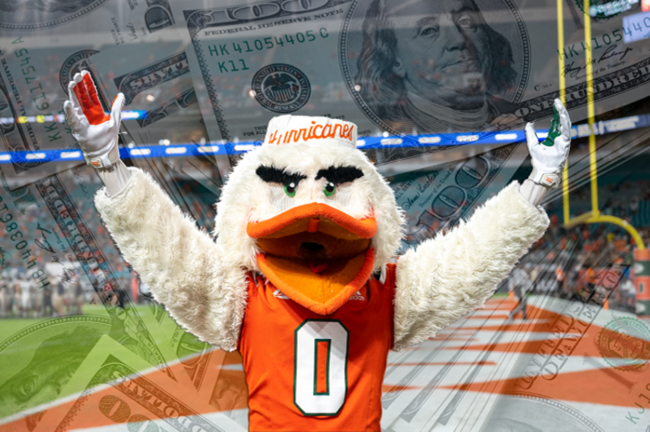 Jaden Rashada is the ninth-ranked quarterback in the Class of 2023, per On3 Sports. He is a four-star prospect that has garnered a lot of attention from top FBS programs and committed to Miami on Sunday afternoon over four SEC programs.

Despite having eight other quarterbacks ranked ahead of him, there is a lot of hype around Rashada’s potential and his class is extremely deep. He stands 6-foot-4, 190 pounds and has received comparisons to Marcus Mariota, Patrick Mahomes, Jayden Daniels and Trey Lance, among others.

As a result, Rashada was in high demand and an expensive NIL bidding war reportedly broke out. Earlier this year, a five-star quarterback in the Class of 2023 reportedly signed a deal for his Name, Image and Likeness worth up to $8 million.

According to Jeremy Crabtree of On3 Sports, Rashada’s deal is even bigger. And it wasn’t even his largest offer.

So happy to represent such an amazing young man! pic.twitter.com/L2no55wE2n

The Gator Collective says that it is not true.

Ruiz pledged to pay out $10 million to college athletes through his company LifeWallet and is well on his way. He has signed more than 50 athletes from the University of Miami and Florida International University to deals already.

And he has not been quiet in announcing those deals.

This time, however, Ruiz is not boasting his reported deal with Rashada. He is saying that it never happened and Caspino is saying the same.

Mr. Ruiz is correct. I have never ever, spoken to him about Jaden Rashada. In fact, 90% of our discussions have been about our amazing kids. We both share something in common, we are deeply proud of our adult children.

This is an interesting development. Caspino went on the record in On3 Sports’ report and said that Rashada turned down opportunities for millions more at other programs.

“Jaden left millions on the table,” said Caspino to On3 Sports. “Millions. He did not pick the highest offer. He went there because he loves Miami, the coaches, and the opportunity.”

Caspino did not reveal any numbers. Nor did he reveal who the deal(s) are with. But he is saying that it was not with Ruiz and he is calling any insinuation that he may have leaked the Ruiz deal a “total lie.”

So that leaves three questions as this story continues to develop:

We may never know the truth. The current era of NIL is complete and utter chaos, and it comes with a lot of rumors, reports and fabrications from all kinds of players within the space. But whatever the reality may be in regard to Rashada, it sounds like his opportunities to cash-in on NIL will be — or already are — rather significant.