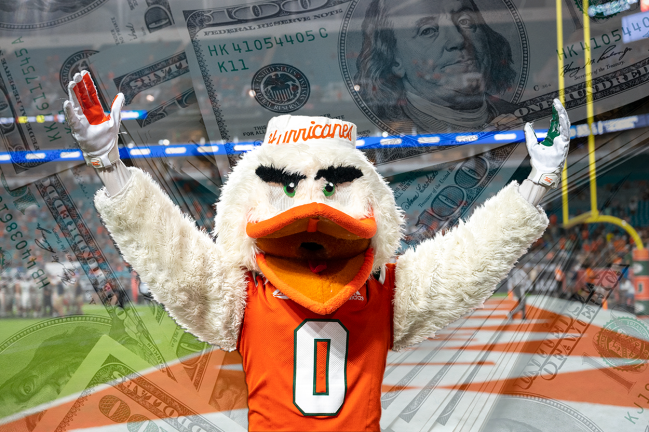 The University of Miami has received an influx of high-profile commitments across all sports in recent weeks. Those commitments often coincide with some massive NIL deals that are being signed shortly after the decisions were announced.

There is a clear connection between the success of the Hurricanes in recruiting and NIL and it all stems from billionaire booster John Ruiz. Why wouldn’t a recruit want to go where he or she can legally get paid the most money?

Name, Image and Likeness was first introduced in July of 2021. The concept is simple— the NCAA’s new legislation allows college athletes to make money off of their person while still in school. That could come in exchange for public appearances, commercials, social media posts, or simply wearing the brand.

On one end, a college softball player can give private lessons to a little league player and legally accept money in return. On the other end, Caleb Williams can sign a deal with Beats By Dre.

There are two, very distinctly different sides to NIL and it opens the door for something of college free agency.

Although paying a recruit or transfer directly in return for his or her commitment is still illegal, there are legal workarounds. A school or its boosters can float the idea of NIL money that exists, should that player decide to sign with that school.

Or, in the case of Ruiz at Miami, the recruits already know how much money is out there because he is very vocal about his financial commmitment.

That deal is then signed after that player commits or enrolls.

Miami had that exact NIL situation play out over the weekend when Nijel Pack committed to play basketball at The U.

Pack, a former Kansas State Wildcat, entered the transfer portal after the season. The former four-star recruit was an All-Big 12 selection after averaging 17.4 points per game last year and committed to continue his career at Miami.

Not long thereafter, it was announced that Pack signed a deal worth $800,000 for two years and also includes a car.

***BREAKING NEWS*** @LifeWallet is proud to announce @NijelPack24 has officially committed to UM as a basketball player. The biggest LifeWallet deal to date, two years $800,000.00 total at $400,000.00 per year plus a car. Congratulations!!! @johnnyruiz4 @alex7ruiz @ddiazon7 pic.twitter.com/SzKHag8qnG

Pack is just the latest Miami athlete to sign a massive deal with Ruiz and his company LifeWallet. LifeWallet is a new product that allows medical information to be stored securely and accessed easily.

Excited to launch LifeWallet today. As promised, LifeWallet provides healthcare practitioners access to your entire health history, including critical medical information that could save your life or that of a loved one. THE TIME IS NOW!!! https://t.co/E4N3hn2sgj pic.twitter.com/YE804s80wv

At the forefront of the company is Ruiz. Ruiz became a billionaire in 2021 and has been extremely vocal about his desire to boost Miami athletics. Not only does he want to build the school a new football stadium on campus in Coral Gables, but he and his company are pumping a lot of money into NIL deals.

Earlier this year, he pledged $10 million through LifeWallet.

LifeWallet has set aside 10 million dollar for NIL deals. We are more than ready. #thetimeisnow https://t.co/S7xrPsMtGZ

That number, obviously, is a lot of money to pay out to college athletes. But they are well on their way.

Ruiz and LifeWallet have now signed 50+ Miami (and even some Florida International) athletes to NIL deals totaling $2.3 million.

Pack is the most recent athlete to sign. Although ‘pay-for-play’ remains a violation of NCAA rules, there are legal workarounds to essentially guarantee a recruit a deal for NIL in exchange for his or her commitment. Ruiz and Miami are using every possible opportunity for ambiguity to use the system to their advantage and it’s working.

Everything Ruiz and LifeWallet are doing is legal. They are not violating the NCAA’s rules. They are waiting until a player commits or enrolls and then signing the deals. It’s completely within the realm of what the NCAA has made possible with NIL and they are doing a great job of staying within legal boundaries.

Here is a complete list of NIL deals that Ruiz and LifeWallet has signed to date: