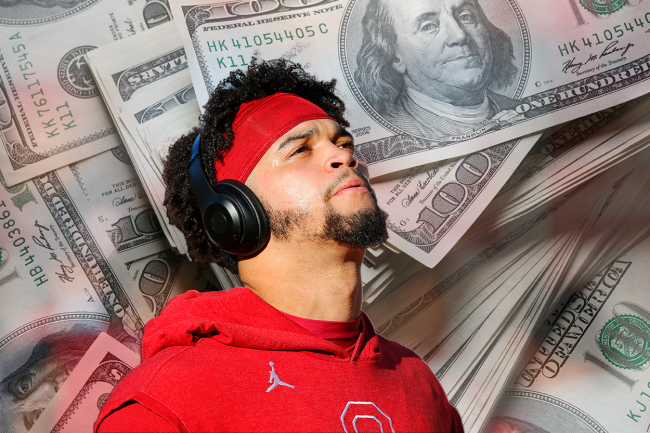 Caleb Williams has been officially committed to continue his college football career at USC since Tuesday. Less than four full days after transferring to the Trojans, he has already locked in a massive deal for his Name, Image and Likeness.

On Friday night, Beats by Dre announced that Williams is joining the family.

Details of the deal are undisclosed, however, there is a high probability that Williams secured a pretty lucrative bag. Beats by Dre was purchased by Apple in 2014, so USC’s new QB1 is getting that tech money.

The deal with Beats is Williams’ first name, image and likeness deal since committing to play for Lincoln Riley in Los Angeles. It won’t be his last.

Although Williams and his family maintained from the moment that he hit the transfer portal that he was not worried about money and only focused on getting ready for the NFL, the opportunity to cash-in on NIL surely played a factor. USC offers him a very lucrative outlook.

Williams is set to be the starting quarterback for the Trojans. That makes him the face of the biggest collegiate program in California and the college football face of the second-biggest media market in the United States.

As such, his opportunities are surely not limited.

Beats by Dre makes a lot of sense, however. Andre ‘Dr. Dre’ Young and Jimmy Iovine, who founded Beats together in 2006, have a direct tie to the University of Southern California.

In May of 2013, just before selling Beats to Apple, Iovine and Young endowed the USC Jimmy Iovine and Andre Young Academy for Arts, Technology and the Business of Innovation. The $70 million endowment helped build a state-of-the-art music building on campus. It’s remarkable.

Thus, for Williams to tap into that pipeline and sign a deal with Beats was a no-brainer. Beats by Dre has worked with quite a few athletes in the past.

Only recently did they expand into the collegiate space with NIL. Deion Sanders’ son Sheduer announced a partnership with Beats early in September. Williams announced his new partnership on Friday.