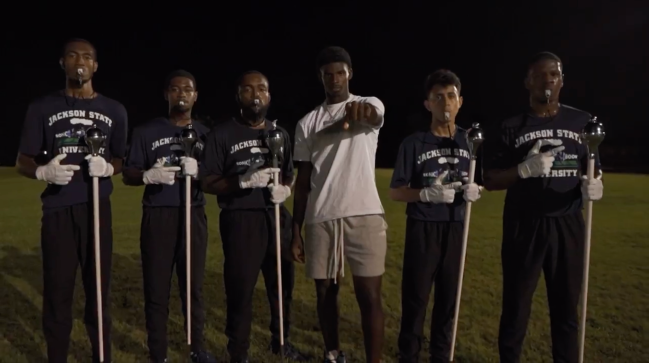 Jackson State quarterback Shedeur Sanders has signed on with Beats by Dre as a brand ambassador, marking the son of Deion Sanders’ first NIL deal. After joining his father in Mississippi in the spring, Sheduer became the school’s highest-ranked signee.

The 19-year-old released a partnership video that showcases the newly-released Beats Studio Buds and the Studio3 Wireless. It focuses on Shedeur’s training regimen illustrates how he uses the headphones in different capacities.

In a release, Beats noted that the Apple-owned brand plans to use Shedeur’ endorsement to feature HBCU culture. The video represents that notion.

When it comes to why Shedeur chose Beats as his first partnership, he says that it’s because it’s a product he has used his whole life. He is the company’s first college athlete and youngest endorser.

“I remember getting my first pair of Beats, so this feels full circle,” he said in a statement. “I’m excited to be part of a brand that inspires and represents the culture in a positive way; and that’s exactly what I want to do with my career. It’s an honor to be the first college athlete on their roster, and I couldn’t have imagined a better partnership.”

Shedeur was ineligible to play in Jackson State’s 2020 spring season but is projected to start at quarterback as a true freshman this fall. While Beats is his first deal, it likely will not be his last.

Having the opportunity to partner with a player of Shedeur’s notoriety and skillset at an HBCU program that has such a deep-rooted history is extremely desirable.