Mark Cuban Awesomely Paid JJ Barea $2.6 Million Before Releasing Him As A Reward For His Impact On The Team 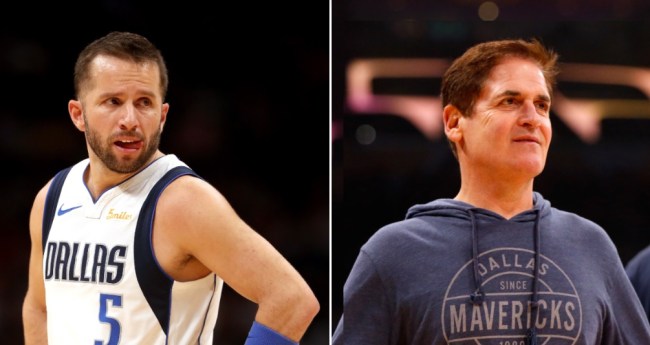 Mark Cuban continues to prove why he’s one of the best owners in the professional sports.

Two weeks ago the Mavericks re-signed JJ Barea, who was a leader for the team during the 2011 finals, to a guaranteed 1-year $2.6 million contract which shocked many fans considering Barea barely played last season.

On Wednesday, ESPN’s Tim McMahon announced the team was releasing Barea just weeks after signing him to a guaranteed deal. According to McMahon Cuban wanted to reward for his contributions to the team over the years.

Filed to ESPN — Sources: Mavs plan to release J.J. Barea on Thursday. Mark Cuban knew this move was likely when Barea signed a 1-year, $2.6M deal last week but wanted to reward him for his impact over 11 years with Mavs. Barea, 36, still hopes to play in NBA this season.

The Mavs anticipated making this move when they signed the 36-year-old Barea to a one-year deal worth the veteran’s minimum of $2.6 million last month. That gave them 16 players with guaranteed contracts, one more than the regular-season roster limit.

Sources said Dallas owner Mark Cuban wanted to reward Barea, a key role player on the 2010-11 championship team who has played 11 of his 14 seasons with the Mavericks, for his contributions to the franchise over the years.

Just an awesome move by Cuban.