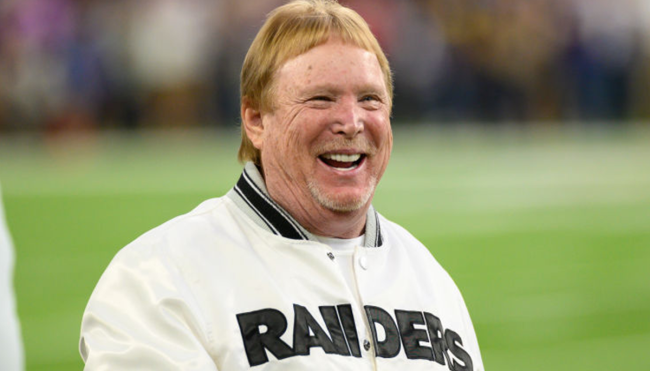 In 2014, ESPN published what is possibly the finest profile ever penned after spending some quality time with Raiders owner Mark Davis. Despite being worth $500 million, we learned the eccentric son of Al Davis was more than happy to live a decidedly unlavish lifestyle defined by:

However, Davis spared no expense when it came to the construction of the $2 billion coliseum the team that is now known as the “Las Vegas Raiders” call home. Based on a report from the Las Vegas Review-Journal, the same can be said about the spiritual relative of the Star Destroyer that is Allegiant Stadium he’s decided to construct in Henderson now that the franchise has officially set up shop in Nevada.

This is the house Raiders owner Mark Davis is building in Henderson's luxury Ascaya community. pic.twitter.com/82eIN2fEI7

The outlet got its hands on the construction plans for the over 15,000-square-foot complex, which is slated to be erected in the exclusive Ascaya neighborhood that’s already filled to the brim with some equally lavish homes. Based on the blueprints, 5,422 of those square feet will be devoted to a massive garage, but it will also feature a steam room, a massive outdoor pool, and the requisite “man cave” where Davis can just be a guy being a dude.

It’s safe to say the futuristic exterior of a home that’s expected to run Davis $14 million is the most intriguing aspect, and plenty of people chimed in with comparisons after getting a glimpse at the proposed design.

i 100% believe mark davis met an architect at pf changs, said the words "nintendo gamecube" and "laser tag," and handed over a briefcase with $14M cash https://t.co/Kz4oVmXdOf

Is that a house or a concept for a community college? https://t.co/iXXZWi1P6V

To be fair, when Mark Davis presses a certain button, the massive robot body of which this mansion is just the forehead and ears rises forth from the ground to defend the planet against the Zarquinx Intergalactic Imperium. https://t.co/ZVXWtJkpTd

Mark Davis watched one Iron Man movie and decided he was gonna build this house. https://t.co/WoUxvbIrRD

Mark Davis is worth $500M and his vision for the height of elegance is Bowser's Space Castle. https://t.co/qolE4iMjjJ