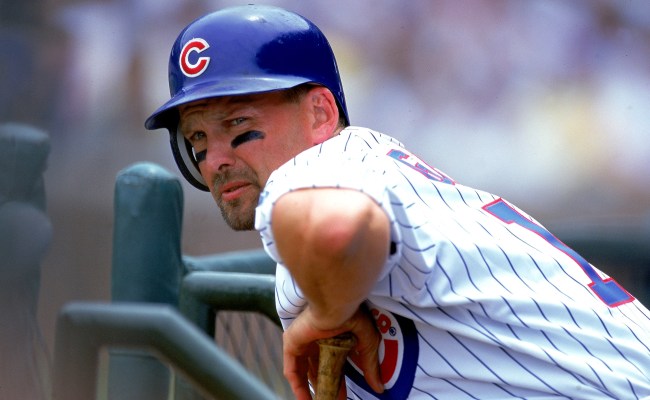 For Major League Baseball first baseman Mark Grace is a legend in Chicago after 13 excellent seasons with the Cubs.

He was also a legend off the field being perhaps the most eligible bachelor in the city, much of which was discussed on sports radio during his playing days.

Related: Mark Grace Says He Avoided Steroids While Playing For The Cubs Because He Didn’t Want Shrinkage To Prevent Him From Getting Laid

Grace ended up finishing his career playing three seasons with the Arizona Diamondbacks before calling it quits with a superb career .303 batting average.

Now Grace serves as an analyst for select Chicago Cubs games on Marquee Sports Network as well as working in the booth for Diamondbacks games for Fox Sports Arizona.

Mark Grace is back 👏

No. 17 will join Marquee Sports Network as a Game Analyst! pic.twitter.com/JfbfYr1nK2

On Saturday, while working the Cubs game versus the Brewers, Grace got himself into some hot water when he decided to tell a story about his ex-wife, who he referred to as “dingbat” multiple times while telling it, once parked in former MLB commissioner Bud Selig’s parking space.

“My ex-wife, I’m going to go Archie Bunker on you guys a little bit,” Grace began the story, getting off to a hot start. “I called her the dingbat.”

Following his little soliloquy, viewers immediately jumped on social media to express their displeasure with Grace and his story.

I had to rewind and turn on the closed captions to make sure I heard Mark Grace correctly @WatchMarquee pic.twitter.com/tXieg6QYJt

As soon as I heard Archie Bunker come out of Mark Grace's mouth, I knew this was not going to go well. It was a Train Wreck and God Bless Len & JD because all they could do was listen. https://t.co/aSgV0aQkRL

Grace has now been suspended by Marquee Sports Network for the next five Cubs games.

He later apologized for his story in a statement (via Chicago Tribune).

“During today’s game I referred to my ex-wife in a way that I absolutely should not have,” said Grace. “I want everyone to know how very sorry I am about that. My remarks were offensive and inappropriate, and I deeply apologize.”

Frankly, I am surprised it took this long for Grace to get into trouble.

“You know who could really add class to our broadcast? The slumpbuster king.”