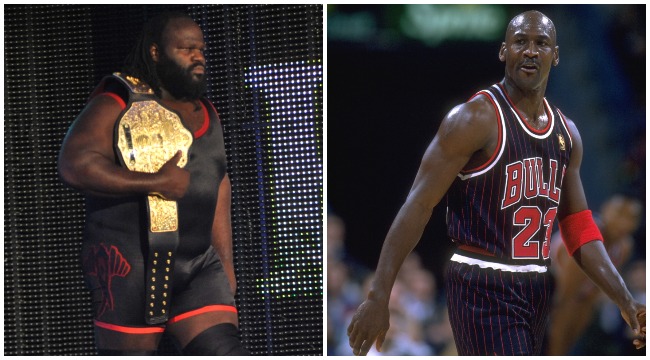 Before Mark Henry was a two-time WWE world champion and Hall of Famer, he was just like, the strongest man on the planet.

The 6-foot-4, 360-pounder is a two-time Olympian and an all-time raw world record holder in the squat and deadlift. In 1996, Henry was fresh off a WDFPF World Champion in powerlifting and had just become the U.S. National Champion in the sport en route to becoming the most popular Olympic lifter in US history.

Before becoming a professional wrestler in 1996,Mark Henry competed in super heavyweight weightlifting in the 1992 Olympics in Barcelona,Spain and in the 1996 Olympics in Atlanta,GA:at the age of 24,Henry had earned the title of "The World's Strongest Man" pic.twitter.com/9OEUfUFvM3

And Michael Jordan treated him like O’Doyle treated Billy Madison.

Henry recently reflected on a tense encounter he had with Jordan during the 1996 Summer Olympics in Atlanta when Henry tagged along with his friends Charles Barkley, Karl Malone and David Robinson.

“At the 1996 Olympics, I was friends with Charles Barkley, Karl Malone, David Robinson. I knew guys personally. I went to the hotel with Charles. As we’re in the lobby, Michael walks up. It’s not, ‘Hey guys, how are you doing?’ It was was, ‘Who are you?’ I said, ‘Who the fuck are you?’ And that was the introduction. Charles was like, ‘Ohhhhhh.’”

Henry continued, “It didn’t matter (that I knew him). It was the [principle]. You don’t walk up to Mark Henry and talk to me like I’m some kind of peon. I was somebody in the world. Maybe I didn’t make the money you made, people don’t know my name, I don’t sell a billion dollars in shoes. But I’m Mark Henry. And if I wanted to snuff your lights out, I would do it in a heartbeat. Charles smoothed it over. The [Michael] was like, ‘My bad, I didn’t want to come across like that.’ But he did. Of course, he smoothed it over and said he wasn’t trying to disrespect me.”

“It was real cool then because he was under the microscope of his peers. They were looking at him like, ‘Why did you do that? He didn’t do anything to you.’ Now he’s talking to me with kid gloves. Not to mention, I looked at him like I was going to snap my fingers and it was gonna be like Thanos and would he disappear. I put him in his place,” said Henry.

If MJ was treating the World’s Strongest Man like gum on the bottom of his shoe, I can’t imagine how mercilessly he ridiculed the short, plump Jerry Krause.

Jerry Krause like type of guy who allways has a tuba soundtrack following him around pic.twitter.com/MzRmsHaWai