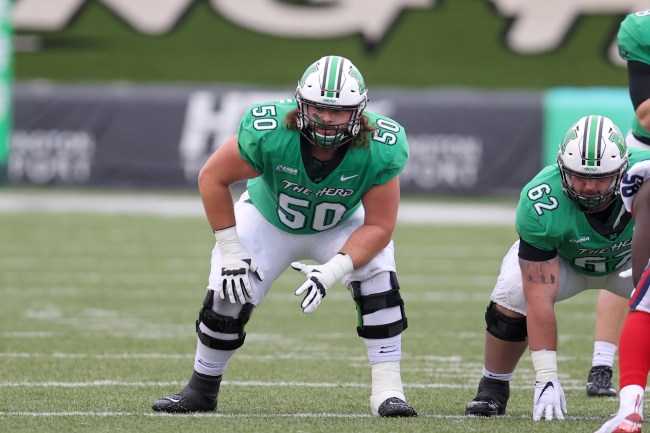 Don’t look now, but Marshall University football is 6-0 after its dominant 51-10 win over UMass. While the Thundering Herd rolled to victory behind 118 rushing yards from running back Brenden Knox, it was the offensive line that stole the show. The Big Uglies down in Huntington, W.Va. have paved the path to winning ways all season and are anchored by two massive tackles.

On the right side, 6-foot-5 senior Will Ulmer III leads the charge. He got chippy with one of the Minutemen defensive linemen on Saturday and sold an epic flop.

Not only does he have a sweet mullet, but Marshall right tackle @UlmerWill is a fantastic actor 😂 #BigUglies pic.twitter.com/QUqgXssUhf

The video shows that it is Ulmer who actually began the altercation with a little shove to give his running back some space to stand up, and the UMass defender didn’t take too kindly. The two get up in one another’s face before No. 55 shoves back. Ulmer immediately throws his hands in the air and steps backwards. After a solid three-count, he flops backward and draws a penalty.To grow the legend even more, Ulmer rocks an incredible mullet that puts Billy Ray Cyrus to shame.

The Academy Awards are not too far away, and if the flopping Herd trench warrior doesn’t receive a nomination, it will be the biggest snub since ‘Saving Private Ryan’ lost best picture to ‘Shakespeare in Love’ in 1999.

No. 16 Marshall will face Middle Tennessee, Charlotte, Rice and Florida International to try and round out its 2020 season without a loss. All four opponents don’t compare to the talent that the Herd has upfront, including Ulmer the Third, but anything can happen on any given Saturday.