Marshawn Lynch Has A Simple, Yet Also Perfect Response When Asked What Impressed Him Most About D.K. Metcalf’s Record-Breaking Game vs. Eagles 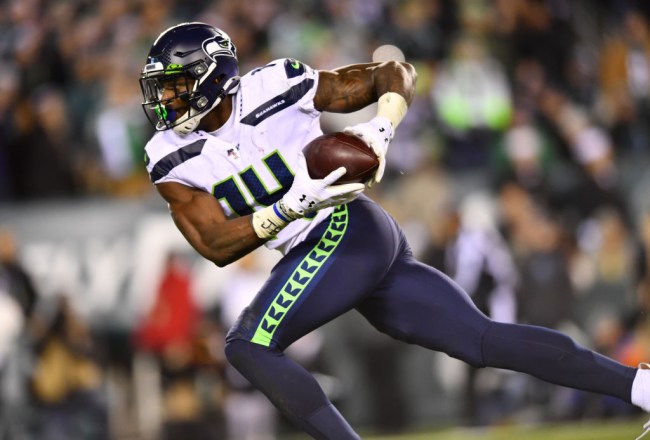 D.K. Metcalf has had quite the rookie campaign with the Seattle Seahawks. The former Ole Miss standout has made plenty of NFL scouts look like complete dumbasses for letting him slip all the way to the final pick in the second round of last year’s NFL Draft.

While his physical tools and size are literally visible for the world to see – the man looks like a Greek statue – it was the fact that he posted bad numbers in the three-cone drill that kept plenty of scouts (boomers) from picking him sooner.

While his 900 yards receiving and seven touchdowns during the regular season were impressive enough, he flexed his large muscles all over the Eagles in the Seahawks’ Wild Card win on Sunday.

The 22-year-old caught a 53-yard touchdown pass and finished the game with 160 yards on seven catches, which set a new NFL record for most receiving yards by a rookie. It also snapped Seattle’s own postseason receiving yards record held by Zach Miller who posted a 142-yard game back in 2012.

Following the Seahawks’ 17-9 win, Marshawn Lynch was asked about what impressed him the most about Metcalf’s record-breaking game and gave one of the most Marshawn Lynch answers imaginable, but it was also a great answer at the same time.

“That he a big ass dude who can move like that,” Lynch said according to Pro Football Talk.

Metcalf is a big ass dude and while his size at 6-foot-4 and 229 lbs catches most of the attention, this is also a guy that ran a 4.33 40-yard dash at the NFL Combine.

A guy that big moving that fast is special and while it’s incredible to see as a spectator, he’s even blowing the minds of some of the NFL’s best like Lynch.