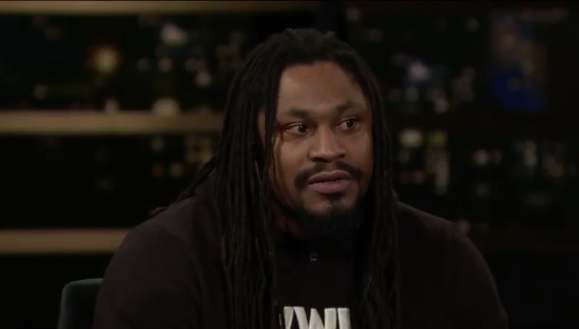 Marshawn Lynch isn’t one to hold his tongue.

Last year, Donald Trump specifically called out the Raiders running back on Twitter for kneeling during the national anthem.

Marshawn Lynch of the NFL’s Oakland Raiders stands for the Mexican Anthem and sits down to boos for our National Anthem. Great disrespect! Next time NFL should suspend him for remainder of season. Attendance and ratings way down.

In an interview with Bill Maher on HBO’s political show “Real Time”. Lynch was asked about President Trump calling him and NFL players who have knelt during the national anthem “unpatriotic” and his answer did not dissapoint.

“That motherfUcker say a lot of shIt,” “he called me unpatriotic but if you know me you know come to my neighborhood where I’m from you’ll see me take the shirt off my back and give it to someone, what would you call that?”

Marshawn Lynch on Bill Maher’s show did not disappoint. pic.twitter.com/ws1n5ikTHu