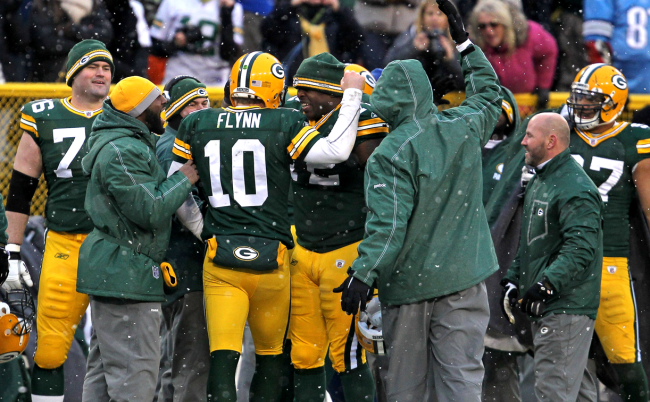 Right or wrong, Aaron Rodgers has a very high opinion of Aaron Rodgers. In his mind, it would seem, there is nothing he cannot do.

That sort of thinking has certainly served him well as an NFL quarterback, winning him a Super Bowl, a Super Bowl MVP Award and four NFL Most Valuable Player Awards.

In fact, he knows so much about football that he doesn’t even really need someone to call plays for him.

Case in point, on Tuesday’s episode of The Pat McAfee Show, Rodgers was asked by former teammate A.J. Hawk if the Packers quarterback thinks he would be a good offensive coordinator.

Aaron Rodgers thinks he’d be a good offensive coordinator, because he’s done it before (kind of) for Matt Flynn

“I think I would because I know what I don’t want as a quarterback,” Rodgers responded. “I could call [plays] for another quarterback, and I have before. … It’s a story for a different day, but… 2011, Week 17. I called that game.”

“When Flynn set the record?” Hawk asked a smiling Rodgers.

“Is this new news?” McAfee asked.

“I don’t think that’s new news. I think that’s been out there that I had a hand in a lot of those calls, but … hey, I didn’t do a whole lot. Matt balled out. Drew ’em offside, threw a touchdown. Threw a key to Jermichael [Finley] for a touchdown. Had an empty pressure, threw to Donald [Driver] for a touchdown. We had a screen, that nobody ran the screen except for the receivers and Ryan Grant, and Ryan went 80 yards for a touchdown. It was a well-played game for Matty. I’m real happy for him.”

Had to audible outta most of them

Surely, Matt Flynn is just busting his former teammate’s ball there, but that’s as solid a comeback as you can get when someone is trying to steal your thunder.

By the way, in the game in question, the 14-1 Packers vs. the 10-5 Lions on January 1st, 2012, Matt Flynn threw for 480 yards (not 486, as Rodgers said) and SIX touchdowns (both Packers franchise records, sorry, Aaron, incorrect again) as the Pack beat Detroit 45-41 on that TD pass to Finley that Rodgers referenced.

Matthew Stafford also threw for 520 yards and five touchdowns in a losing effort for Detroit.

It was the first time in NFL history opposing quarterbacks each threw for 400-plus yards and five-plus touchdowns in a game. The teams’ combined 971 net yards passing was also a NFL record.

Matt Flynn ended up parlaying that performance into a three-year deal with the Seattle Seahawks worth $20.5 million. Unfortunately for him, Seattle also happened to take Russell Wilson with their third round pick during that same offseason and he ended up throwing just 9 passes for the Seahawks before being traded to Oakland.

None of which would have happened without Aaron Rodgers on the Packers’ headset on New Year’s Day 2012, of course.