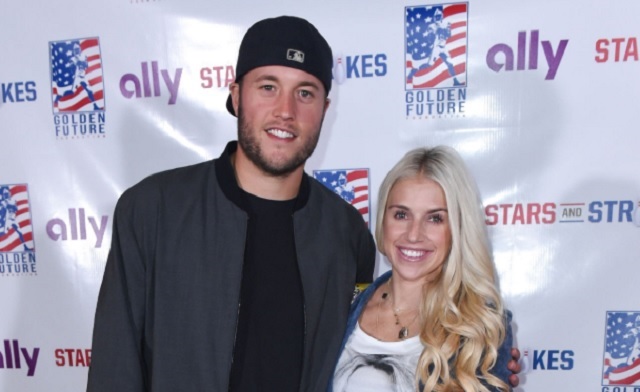 Matthew Stafford’s wife, Kelly, has absolutely no time for the media calling her husband out for poor play.

After Stafford helped lead the Lions to back-to-back wins, Detroit got hammered by the Colts at home this past Sunday 41-21. Stafford completed just 24-of-42 passes in the game, but did manage to throw three touchdowns.

“I don’t expect Stafford to do everything and, in fact, I wrote in Sunday’s Free Press that it’s unfair for the Lions to expect regular late-game heroics out of him. But he needs to be better than he was against the Colts. A lot better.”

“He missed some easy throws that would have either extended a drive in the first half and helped out a tired defense.”

Kelly, who is no stranger to calling out the media and standing up for her husband, saw the article and tagged the Free Press in her Instagram story, writing “@Detroitfreepress Proving they have zero idea what they are talking about YET AGAIN. Stick to EVERYTHING besides sports. K thanks, bye,” Stafford posted, per Awesemo.com.

Interestingly enough, Matthew seemed to pretty much agree with Monarrez’s assesment of the game.

Absolutely nothing wrong from all three parties involved here. Monarrez was doing his job and offering up his opinion, Kelly was sticking up for her hubby, and Stafford put himself on blast after barely completing 50% of his passes in a 20-point loss.