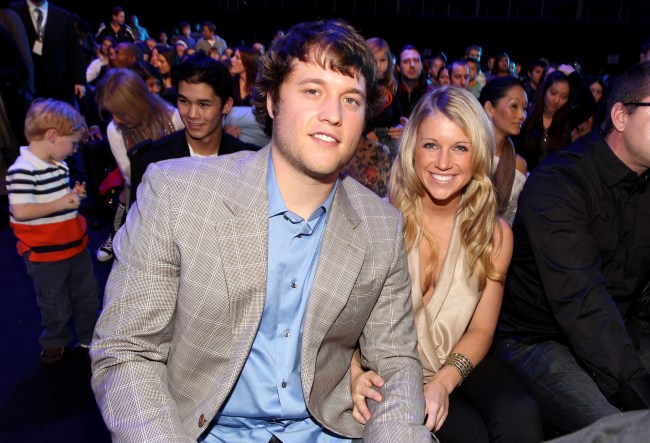 Remember when the Lions whacked the Patriots in Week 3, infusing the Detroit fanbase with a glimmer of hope for the season? Well that glimmer has dulled, as the Lions are 3-5 through the midway point of the season and find themselves in the basement of the NFC North.

Most recently, the Lions were beaten convincingly by the Minnesota Vikings in a game where Matt Stafford was sacked TEN (10) TIMES and the team looked utterly unprepared from a coaching standpoint. After the game, fans flooded social media to vent their frustration with their quarterback and the rookie coaching regime.

10 year NFL veteran quarterback Matthew Stafford everybody. What an embarrassment. Another season over before it’s even halfway done. See ya at the draft Detroit!

And on this day, Matthew Stafford officially became a Lion: pic.twitter.com/sV4NE5H4dB

Twitter heads weren’t the only ones criticizing Stafford, CBS Sports Network analyst and former NFL MVP Rich Gannon piled on Monday on the show NFL Monday QB. Gannon said he was “sick and tired of talking about Matthew Stafford,” and twisted the knife with this comment:

“The guy is overpaid,” Gannon said. “He’s been one of the highest-paid quarterbacks over the last four or five years and he’s a stat king. He picks up a lot of yards and production in garbage time.”

Gannon’s claim is a half-truth that deserves some examining. Stafford did sign a five-year $135 million extension in 2017 (the richest contract in NFL history at the time), and has only made three playoff appearances in his nine year NFL career, and never securing a playoff win.

Regardless, Stafford’s wife, Kelly, is going to stand by her man despite the trials and tribulations and public outcry over his production. She posted in an Instagram story after Sunday’s game: 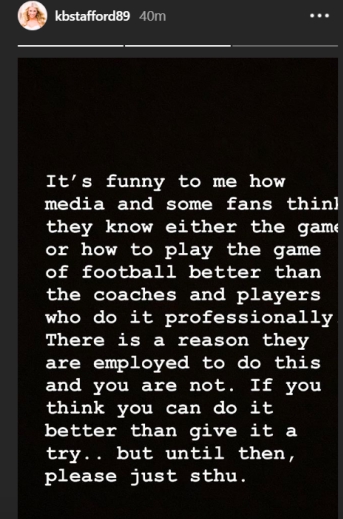 Gotta love a woman who will stand by her man through thick and thin.