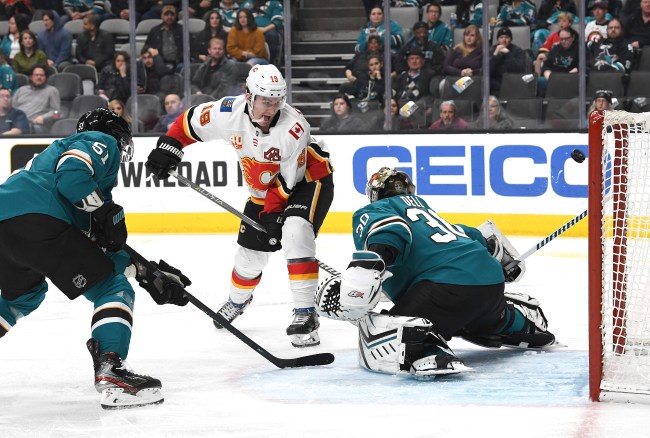 22-year-old Matthew Tkachuk destroyed the soul of San Jose Sharks goalie Aaron Dell with a between the legs goal that Matt fired from behind his back and over Dell’s shoulder. Truly, I won’t be shocked if Aaron Dell never recovers from this complete filth.

The game was already borderline out of hand for the Sharks who have been hit by injuries hard this season. Wins have been difficult for San Jose to come by (24-28 on the season, -40 goal differential). It was 4-2 in the 3rd period with the Calgary Flames on the Power Play when Matthew Tkachuk threw down the sauciest goal I’ve seen in 2020. The Flames would go on to win 6-2 in San Jose.

Matthew Tkachuk has 19 goals and 26 assists for Calgary so far this season (56 games played) and none of them compare to this beauty right here. I must’ve watched this 10x already, in every angle, and slowed down to .25x speed so I could really soak it in. Behold perfection:

Do you send an apology card to the goalie’s family after that? Do you have to apologize for tarnishing an entire career with a goal so saucy it’s all I will ever be able to think of any time Aaron Dell’s name comes up? Dell is 11-11-2 on the season with a .909 sv% and 2.88 GAA. Not great.

But was there anything at all that Aaron Dell could’ve done to try and stop that filth from happening? I’d wager that no, there wasn’t a goalie in the league who could’ve correctly read what was about to happen. Pure filth.

The Calgary Flames are currently sitting in the #1 Wild Card slot in the Pacific with 64 points on the season (-12 goal differential). Calgary is always a fun team to watch but that -12 GD is concerning.

Oddly enough, my favorite overall hockey highlight from last night wasn’t even this goal. It’s this fan who caught a stick and chugged a beer in celebration: